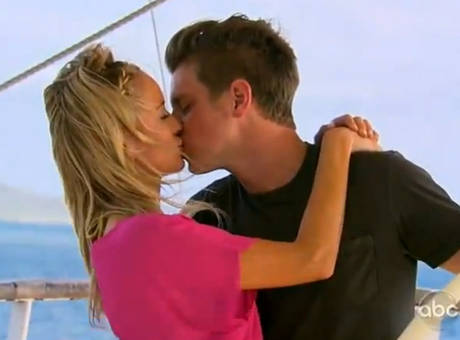 Last night we finally saw Bachelorette Emily Maynard’s hometown dates with her four final suitors. And they were all great, but one hometown just stole the show —  or should we say one “Holm” town! Jef Holm’s hometown at his family’s kick-ass, GI-normous, amusement park/ranch in Saint George, Utah hands down stole the show! I mean, how are the other guys supposed to compete with a family ranch called the Holmstead Ranch and a heartfelt love letter?!

Jef really butched it up for Emily last night taking the Bachelorette Four-Wheeling and Skeet Shooting. (I loved Emily’s comment about how shocked she was that Jef — the guy who wears skinny jeans — was being such a dude).

Jef takes her clay pigeon shooting where Emily is brilliant at playing coy and acting like she has no clue how to shoot a gun, but then hits every target casually revealing she takes gun lessons at home. Jef claims, “Emily looks so hot with a gun.” He says, “I just want her to hold a gun all day long.” Now we are getting into some serious PG innuendo.

As if Jef couldn’t get any more endearing, last night he sealed the deal–at least for us here at Ok, Here is the Situation who are pretty sure we are integral members of Bachelor Nation and thus need to let ABC know when the “deal’s been sealed”.

Jef’s parents were busy bringing Mormonism to South Carolina, so they were absent from the hometown. Luckily Jef’s siblings were able to fill in to grill potential sister-in-law Emily (We love that professional griller and marksman Emily Maynard was now in the hot seat and the one getting grilled)!

Jef’s older brother Steve did most of the grilling to find out “if there’s really something there,” and asked her if she would be setting up her life according to “sound principles”  and other hugely vague and rather meaningless questions that sound like good things to ask a potential soul-mate/life-partner-in-a-mere-9-weeks for your younger brother.

Emily did a truly professional job responding to the vague questions with even vaguer answers.

He asks what she thinks it takes to stay in love, and she very insight-fully replies: it’s about the long haul and “just knowing that this is it.” The sisters just wanted to make sure Emily wouldn’t abduct Jef and take him to North Carolina. They simply wanted to know if she was willing to move to Utah.. and she said yes. (Not hard when you are moving in with someone who has a luxury amusement park/ranch).

The sisters ask if she is “falling in love” with Jef. Emily responds: “I … I do, but as a girl, I hesitate to throw that word out.”

But, the clear highlight was Jef taking Emily to a special spot and reading her a heartfelt love letter — declaring he is “in love” with the Bachelorette and is clearly “in it to win it.”  His letter says that he is “completely in love with everything about her”, and includes a long list of all the things about Emily that he loves such as “I love the thought of falling asleep with you in my arms and waking up to those big brown eyes every morning.” Awwwwww!!! (He is gonna date you so hard Emily!)

“That is the sweetest thing that anyone has ever, ever said to me,” Emily says to Jef as she tears up.

I mean, how in the world are we supposed to even acknowledge there are three other suitors after that ABC! Good God! At this point, these two are clearly a match made in Bachelor/ette heaven!

If you haven’t seen the episode you can watch it here!

More posts about Jef Holm and The Bachelorette: