Bachelor Pad loves to set the scene for serious drama. So they always cast people that either have sexual chemistry or have a serious beef with one another. This season we have serious tension between Erica and Kalon, Blakeley and Rachel and Jaclyn, and Ed Swiderski and Reid Rosenthal.

Apparently Reid is holding a bit of a grudge against Ed. The two were top contenders for the final rose in Jillian Harris’ season of The Bachelorette. And now they are competing for money on Bachelor Pad.

Ok, so I have to be honest. I think Ed is a bit of a douchebag. He just seems like he is trying way too hard to be the cool guy that gets drunk and naked on a prime time reality show. We all know The Pad is about partying, but his complete disregard for Chris Harrison’s authority and professionalism in running the show and his frat-boy antics (ditching his pants and jumping in the Pad pool as soon as he landed) earned him douchebag status in my world. I just hope Jillian is watching and thanking God that she “dodged that bullet”. 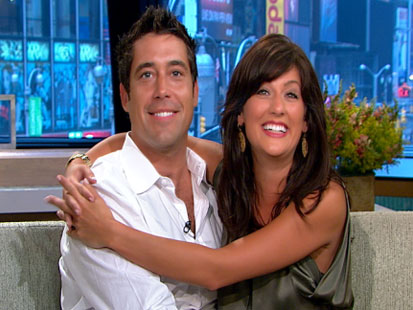 In Ed’s interview with the media today, he answered questions about the tension between him and Reid and revealed he has someone “special” at home. Here are excerpts of the interview from Reality Wanted with Gina Scarpa:

“Q. Gina, RealityWanted: Were you surprised that Reid still harbored resentment towards you about what happened during your season of The Bachelorette with Jillian? It was kind of a while ago…

A. Ed: I was definitely surprised that Reid brought up this baggage and old business. While I definitely respect him for playing the game, I think that he had a hard time playing it and he made some bad moves. Reid’s a great guy and we’re going to stay friends.

Q. Gina, RealityWanted: So were you there for money or for love?

A. Ed: I definitely wasn’t there for love! I absolutely was there to win. I treat it just like any competition. I have someone at home that I have always kind of had feelings for, even though I was single on the show. I wasn’t there to look for anybody but I made some great friendships. I’m happy for that!
Q. You said you have someone back home but you hooked up with Sarah. Did you have any explaining to do?

A. Ed: You know, we weren’t together and we made an agreement. I wasn’t going into this to find a relationship but we agreed that I was going to be single. The game certainly involves having… whatever you wanna call last week. It was fun, Sarah is a great friend, and I think she realizes that. I was very clear about having somebody back home.”

Update: Ben Flajnik and Courtney Robertson move in together!