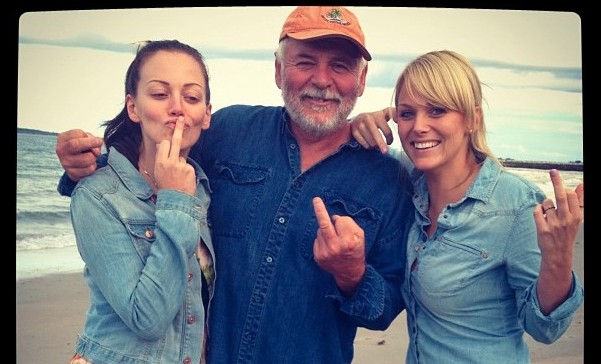 We’ve been following the Michael Stagliano Rachel Truehart situation in detail since Bachelor Pad 3 aired. They were without a doubt one of the biggest situations on the Pad this season and especially on the finale where Rachel confronted Michael about leading her on. BTW, Ok! Here is the Situation broke the exclusive story that Michael’s girlfriend was Emily Tuscherer and that Michael knew her and appeared to be dating her prior to the Pad. (Check out our evidence file of screenshots and Tweets). We just had to use the word EXCLUSIVE because it gets thrown around so much and makes us giggle. EXCLUSIVE!
HollywoodLife.com apparently caught up with Rachel Truehart to discuss the mega-situation. They asked the questions we have been dying to know about!
Like: How and when did she find out about this other girl!!!?
Where do things stand between you and Mike now? Are you talking or are you totally over him?

Rachel: There’s no bad blood between us anymore. There was for a little bit, but it was something I was dealing with the second filming was over. It kinda just went from like 60 to zero so it was a lot to handle. I talked to him a lot of times and I believe that he’s sorry and he’s apologized to me many times, both publicly and just the two of us. It’s hard, I do think he led me on and I think he knows that he did. There’s no bad blood between us. It is what it is. I’ve moved on. Happy for him.

HL: How did you find out about his girlfriend in Chicago?
R: That was a tough one to deal with because I found out he had a girlfriend about two weeks after I had gotten back and he waited ten days to tell me so that was a little bit tough to find out that way and then another couple weeks later. That was a tough one to get over and I kept finding out from people that things were going on. I kind of wish that he told me everything from day one.
HL: How would you say that your feelings for Mike compared to your feelings for Ben on The Bachelor?
R: Day and night! Sorry Ben. I just really wasn’t falling for Ben. I think you try to talk yourself into it a little bit because of the setting, you’re on these romantic dates and you want to. He was a great guy and we enjoyed our time together but at the end of the day I think that we could tell that we’re both just gonna be friends.
HL: Do you have a boyfriend now?
R: I don’t.