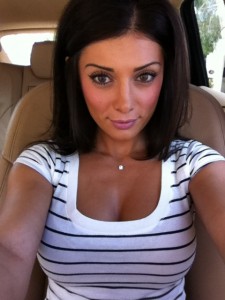 Tonight we finally get to see if Sean Lowe has any chemistry with  29 year-old Real Estate Developmenter Selma Alameri as they finally get a one-on-one date but despite the obvious chemistry the two do not engage in a traditional one-on-one make-out session. In fact, the one-on-one revealed an interesting aspect of Selma’s “Selma is Iraqi,” …. “She was born Muslim. I don’t believe she is now, but her family is, and they’re very strict and very conservative. While she doesn’t necessarily have the same beliefs as her family, she definitely respects her family and their wishes. Just being on the show, as you’ll see, is a huge deal for her.”

Chris explains that the Islamic culture has a few more rules than the Bachelor. “To date out loud is not custom, obviously,” Chris continues. “When you cross the physicality of the show — emotions and kissing and where it goes — they have to deal with that.”

Selma Alameri is actually Iraqi and Lebanese. She is one of the many “shades” of amazing lady this season of the Bachelor displays.

Sean said this to People Magazine about his relationship with Selma:

“It surprised me because she is so affectionate. After hearing about her mom’s beliefs, I completely understood. She was in a tough spot and wanted to kiss me but she had too much respect for her mom. The no-kissing thing made our relationship more exciting because I had something to look forward to. Plus, Selma’s heart and personality were more than enough. Selma left with a rose and with a piece of my heart. Once again, I was starting to fall for another woman.”

When Sean was pressed by producers about what he was looking for he explained it didn’t matter, as he has dated “Persian”, “Hispanic” and “Black” women and the sweet, genuine type is what he is looking for in his future wife, regardless of her race.