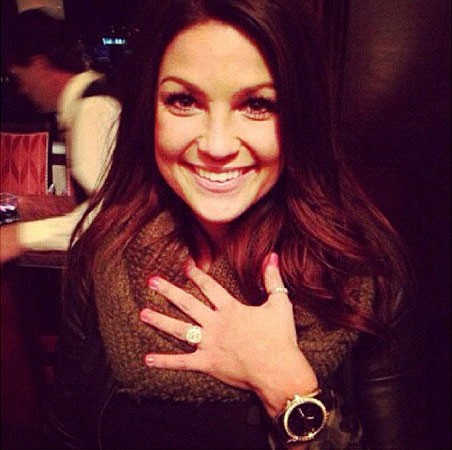 Well less than 7 days after getting the boot from The Bachelor, Bachelor villian 24-year-old Tierra LiCausi is engaged! Fans were shocked to see her Twitter pic revealing an engagement ring on her finger earlier today.

The Reality star/amazing dramatic actress stunned fans a few weeks ago when SHE THREW HERSELF DOWN A FLIGHT OF STAIRS FOR LOVE.

But apparently the girl has picked herself up by her bootstraps and has found love again! No people it wasn’t really a mere 4 days later that she got engaged…it was  a record 4 weeks (in real time) later. And apparently it isn’t just a ploy for attention because Tierra confirmed to Us Weekly that someone else besides the lead of a certain ABC reality show has proposed and she has accepted.

“Tierra got engaged in January. We’re ecstatic for her. She is so happy!” LiCausi’s older brother said.

“They had been together for three years on-and-off. They had broken up in the summer [before the show].”

We still don’t know the identity of the lucky man but her brother said he “and his family have a very lucrative business in Las Vegas.”