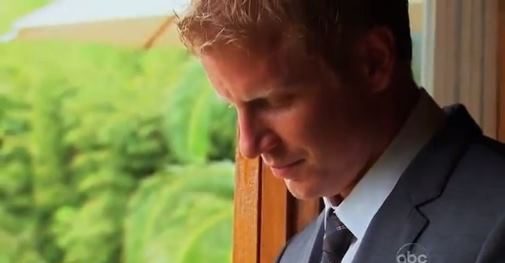 So tonight Sean Lowe will choose his life-partner after 9 weeks of “dating hard” on national Television. The Final Rose ceremony occurred Saturday, November 17th at the Pa Sok Tong Villa just outside of Chiang Rai in Thailand.

No doubt the process of handing out that final rose has to be nerve-racking especially for Sean who clearly takes his responsibilities and duties as the Bachelor very seriously. He spoke to the Hollywood Reporter recently about the tough situation:

“It’s always awkward to face your exes, especially to face someone that had such strong feelings for you and thought they were going to spend the rest of their life with you.”

Sean also revealed in the interview that his family had some serious reservations even before he even signed up for Emily Maynard’s season of “The Bachelorette,” doubting whether or not this process would actually work (We still don’t understand how family members can have doubts about a loved one finding love in 9 weeks on reality Television):

“[My mom] thought that there’s no way that I’m going to find love on a reality show. She thought that I might be portrayed in some way that’s not who I am.”

Us Weekly sources are also weighing in on Sean’s nerves saying the 29-year-old fitness model was very serious about his feelings, and was a ball of nerves by the time the morning of the proposal rolled around.

“Even on the morning of the proposal, he was still thinking about what to do” .

Sean, the enneagram 6 (the Loyalist) even pulled both Catherine  Giudici, 26, and Lindsay Yenter, 24, aside off-camera in Thailand to grill them with some very hard-hitting questions — probably a lot of questions about JC and religious beliefs — I mean where has JC been ALL season!!! And enneagram 6’s LOVE to grill potential mates with hard-hitting questions–remember Emily Maynard grilling her potential suitors from day 1 with hypotheticals?

“These weren’t loving chats,” the source said. “These were nervous, freaked-out chats. … They discussed faith, family and what their futures would look like.”

Good God!!! The last second chat about faith, family and future?!!! Shouldn’t that have occurred in week 6 or 7?

At any rate we can NOT wait to pump up the volume and see who Sean picks!!!!