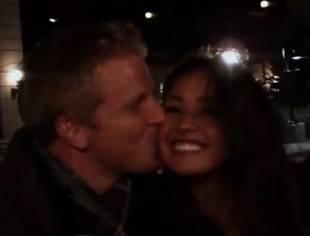 Are Sean and Catherine astrologically compatible?

Watch out, Bachelor Sean is a Scorpio! — meaning he can be a very intense guy. Obviously Sean is very spiritual. Tonight we finally started hearing Sean talk about “prayer”, “faith” and Jesus. He clearly took his role as the Bachelor very very seriously. His Moon in Aries which makes him outspoken and a bit of a hot head–although we have not seen that side of Sean yet.  He has Venus in Libra, (his love sign) so love is important to him.

Catherine Giudici, is a Taurus, making her well grounded, down to earth, and loyal (a very good quality for Sean’s mate). We definitely saw Catherine’s ability to handle a situation with Tierra.  Catherine certainly appears to be the most grounded of all the ladies this season. HOWEVER, in typical Taurus fashion she is stubborn and likes to be in control. (Remember with Emily and Jef, both needed to be the center of attention which we predicted would be the demise of their relationship). This too could be problematic. Taurus’ are creatures of comfort and security. That could bode well for the two. But they won’t easily show their cards.

Catherine’s moon is in Capricorn making her less emotional. This lack of emotion combined with hot headed Sean could be a situation.

Are they compatible? I’d say…”Eh”, not really.

They are the polar opposites astrologically. So it’s either a match or a sea of confusion and doubt. Catherine and Sean are obviously super in to each other, but we don’t really think it will last, primarily because Sean is really ready to settle down in a Dallas suburb and Catherine appears to have a lot of living to do.