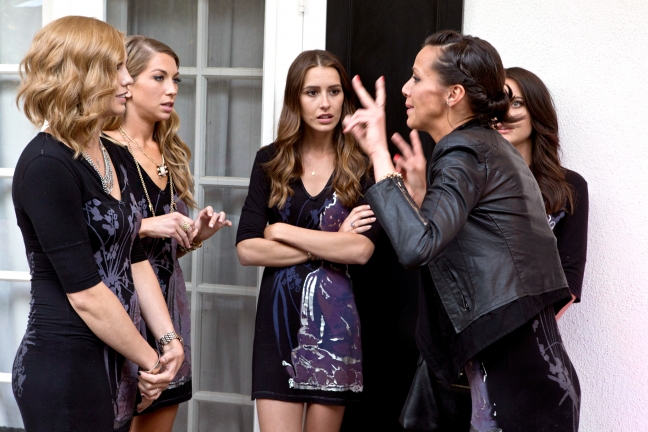 The situations just don’t stop coming on this season of Vanderpump Rules! Just when we thought we had seen the last of the incestuous hook-ups a new bombshell is dropped by none other than Katie Maloney — who always seems to find herself in the middle of SUR situational drama.

A drunk Katie exposed the biggest scandal yet!–that Kristen and Jay hooked up!

Stassi, who has no qualms about dishing serious dirt on camera said this:

“Last night after Peter’s birthday, Katie completely went to the dark side,” . “Katie said that Jax told her that Tom and Ariana hooked up. But the biggest bomb she dropped was that Kristen and Jax f—ked.”

Katie later claims that she “hates” herself after being confronted about her drunken outburst.

Stassi confronts Jax about the allegation in front of other SUR workers. “First things first: did you f—k Kristen”

“You’re asking me this question?!” Jax responds. “No, I did not f—k Kristen! First of all, that’s like banging my sister. That’s gross. I might have had sex with a lot of people, but not Kristen.”

Stassi is taken off guard and unable to tell whether Jax is telling the truth:

“I usually know when Jax is lying or telling the truth. But this is one of those moments where I really just don’t know.”

Stassi recently took to Twitter to defend drunk Katie and her unfortunate “overshare”.

Take it easy on my @MusicKillsKate. Simply too many tequila shots… We’ve all been there! #loveyoumaloney

But hey at least she took the heat off of poor Tom, right?

Although Tom very recently expressed frustration with Katie on Twitter for interfering in his relationship with Kristen Doute on the show.

To which Katie responded:

Well, this season of Vanderpump Rules certainly has not disappointed! Stay tuned for the latest on this mega-situation!