Did Tom Sandoval cheat on Kristen Doute with Ariana Madix? 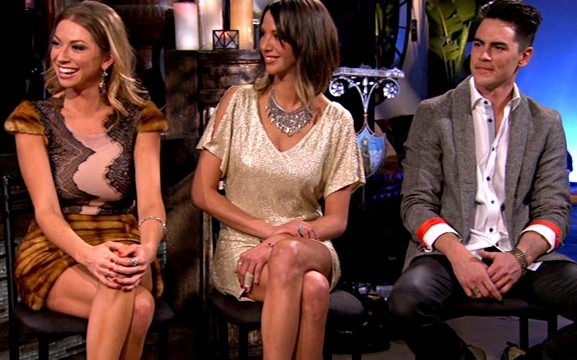 Tom Sandoval vehemently denied that he cheated on girlfriend Kristen Doute with new server Ariana Madix  on the last episode of Vanderpump Rules, but this weeks episode shows a preview of Tom admitting to sleeping with someone and shows Kristen shocked and devastated by the news.

In other words it looks like the rumors were true and Kristen’s latest Bravo blog only seems to reinforce that suspicion.

Kristen even says this about her new co-star, Ariana,

“Ariana is a home wrecking w—- and doesn’t deserve to be spoken of.”

“To be honest with you guys, I had a really hard time with this episode and didn’t watch it in it’s entirety,” Kristen said in her Bravo blog on November 25 of Monday’s new episode.

“Tom and I were mending the wounds. We were both working on empathy and focusing on our blissful present, rather than the painful past. He had accepted that I was still hurt and I realized I had to stop punishing him in order for us to move forward and be happy”.

“Being a b—- was just my defense mechanism for all of the hurt I had building up inside for so long. I don’t even think I was actually angry — just devastated.”

It looks like Tom had been texting Ariana and sending some rather suggestive texts about “Coachella”.

So it looks like Jax was actually right this time….