Are Sean Lowe and Catherine Giudici faking it for the cameras? 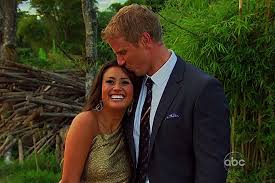 On Jan. 26, 2014 Sean Lowe, 29, and Catherine Giudici, 27, will tie  the knot in a televised ABC special. The event will be the first successful Bachelor wedding to emerge from The Bachelor franchise–ever!

After 17 seasons of The Bachelor ABC has yet to show one successful marriage! (Of course Bachelorettes have shown far more success with the wedding of Ashley Hebert and Trista Sutter).

So in other words this wedding is important to ABC to maintain a little credibility. So is it crazy to suggest the the wedding may be a fraud?

I suppose there are a lot of different possibilities with this theory–as in ABC may be ‘in on it’ to promote the show, Sean and Catherine may also be doing it for the cash and self-promotional reasons sans ABC knowledge.

So let’s examine the evidence:

The two are getting a nice chunk of change to marry in front of the Bachelor Nation…..

2: Sean’s family wanted Sean to call it off early on:

The report according to InTouch Weekly, claims Sean Lowe’s mother Sherry is encouraging Sean to call it off. The magazine reported that after several instances of Catherine crying and fighting with Sean in public, he sought out advice from his mom who “said it isn’t right for Catherine to pick fights with him over his career, and maybe they shouldn’t go through with the wedding.” In fact, the insider claims Sean’s parents are “begging him to rethink everything.”

3: Sean’s sister’s cryptic blog:  Shay’s blog had some rather cryptic messages right after the two were engaged suggesting she didn’t want to “be negative” so she wasn’t going to say anything.

“Our experience with the Bachelorette and Bachelor was nothing but positive.  …

As for the future…I’m just doing what I always do…I’m praying for my brother and his new relationship.  I’m praying for him to always trust in the Lord with all of his heart and live a life that pleases Him.”

5: The relationship was on life support:

We were hearing a lot of rumblings that Catherine Giudici and Sean Lowe’s brand new relationship was on life-support. Us Weekly claimed that the 27 year-old graphic designer was “bored and lonely” since relocating to L.A. to be with Sean Lowe during his stint on Dancing With the Stars.

Sean Lowe’s born again virginity may provide a good cover for why the two can’t be intimate.

7: Catherine and Sean reports of fighting:

Life & Style reported eyewitnesses spotted Sean Lowe and Catherine Giudici fighting publicly at The Sayers Club in Los Angeles back in March while celebrating Sean’s  first Dancing with the Stars performance– and again just two nights later while walking back to their apartment complex where they have separate apartments.

“About an hour after they arrived, Sean and Catherine were in a corner, and she was clearly mad at him, yelling at him” .

HollywoodLife.com’s body language expert Dr. Lilian Glass and she weighed in and said this about Sean and Catherine’s relationship

Here is what the expert said: “It’s over-the-top on Catherine’s part,” Dr. Glass tells us. “Her facial response is stiff and non-emotional. It may work for a while but I cant see it lasting. It is also so superficial with her saying he is handsome and she is beautiful. She also wiped a fake tear from her cheek, it seemed contrived.”

So, is this relationship real? I have my doubts, but only time will tell.

What time does Sean Lowe and Catherine Giudici's wedding start?