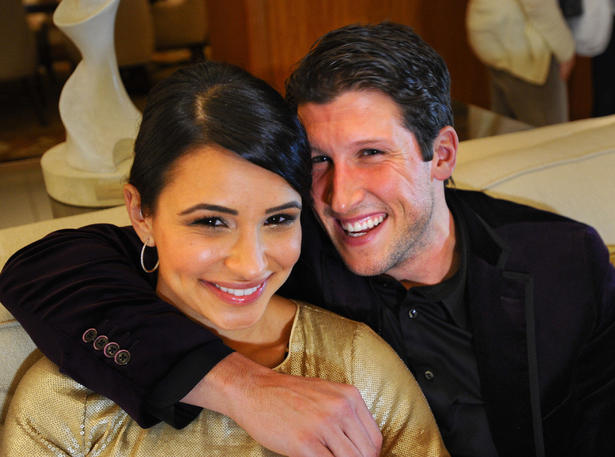 Brad Smith and fiancé Bianka Kamber sadly announced their split this morning after 2 years of dating. The couple seemed absolutely made for each other always happy and upbeat making today’s break-up news even more shocking. They put out a statement this morning, March 19, 2014 on Twitter stating:

“Although we love each other intensely, we both want different things out of life,” …..“We wouldn’t change a single thing about our experience. This was more than just a television show to us, it was real life, and real love.”

Remember Bianka was allegedly cheated on by boyfriend Kris Humphries.

Kris supposedly dumped her without saying goodbye and received multiple text messages from girls claiming to have been with Kris. So understandably Bianka is probably scarred from the experience and we know people tend to repeat patterns, but no word yet on whether cheating occurred.

Here are some tweets that may shed a little light on the situation. It looks like watching the finale of Juan Pablo’s season of The Bachelor was almost too much for Bianka to watch:

@LiveAccess I found my fiancé on The bachelor. I could not hide my feelings even if I tried. It was painful to watch.

Looks like there may have been clues as early as February 5th…One fan commented that the two were not on the red carpet together:

@Kyjoka@Biankakamber11@bradcsmith#agree! You two are great together. I was worried when I didn’t see Bianka on the red carpet!

But a few days earlier everything seemed great.

Tomorrow morning is @bachelorCA auditions at #thegrandhotel, Toronto! If I can pull @Biankakamber11 out of bed you might see us both there!

Then finally this AM, they posted this:

With heavy hearts Brad & I have decided to end our engagement. pic.twitter.com/kZL1KSyhRJ

It’s with heavy hearts that Bianka& I have decided to end our engagement. We want you to hear it from us https://t.co/wT1fG5rA2u — Brad Smith (@bradcsmith) March 19, 2014

Thanks for all of your support. During this tough time, you don’t know how much it means!

Brad recently became an entertainment reporter so perhaps his new career got in the way. Smith was Canadas FIRST Bachelor in 2012. He started with 20 amazing ladies and narrowed it down to 31-year-old Croatian nurse Bianka Kamber from Mississauga, Ontario. The two moved in with Bianka’s family immediately after the engagement. They were planning for a summer wedding…. Please like us on Facebook More on Brad and Bianka here!! Please follow us on Twitter Please like us on Google Plus

The news comes as The Bachelor Canada prepares to cast for a second season, expected to premiere in the fall.