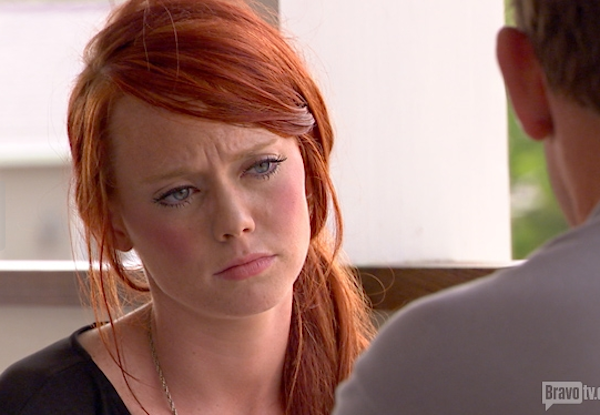 Kathryn Dennis is the 22 year old Charleston, South Carolina, bombshell model, writer on Bravo’s Southern Charm who happens to be the offspring of two of South Carolinas most prestigious political families — longtime State Senator Rembert Dennis and former U.S. Vice President John C. Calhoun and happens to be a bit of a situation.

The fiery red-head swept ex- State Treasurer Thomas Ravenel, 51 off his feet on this season of Southern Charm on Bravo.

Kathryn and Thomas actually made a lot of jaws drop on the show and in their social circle this season when they took their relationship public due to the 29 year age gap between the two. Not to mention a lot of his friends were concerned that Kathryn was a bit of a social climber and may have been after fame and after his money.

The fears were not unwarranted considering Dennis also dated former S.C. Representative Thad Viers. Thad, by the way also has had serious problems with the law including a harassment complaint filed against him by an ex girlfriend in 2011.

And Kathryn did hint that her and T-Rav were having unprotected sex. One co star claimed “Is Katherine trying to have a child by letting Thomas Ravenel [be with her].” Another exclaimed “If Katherine has Thomas’ baby, I guarantee you, she will never work a day in her life.”

Kathryn and Thomas did have a pregnancy scare during the show but after the show finished taping they decided that they wanted to have a child.

Kathryn is not exactly a “good girl” though. She slept with Thomas’ good friend Whitney which was also exposed during the season and caused some additional drama in their relationship.

Kathryn, like Thomas is most definitely not without her demons. She was arrested for underage drinking and disorderly conduct when she was 20 years old. But so was her boyfriend Thomas Ravenel. So nobody’s perfect.

Kathryn and Thomas are currently still together and very happy with new baby Kensington.

3 thoughts on “Who is Thomas Ravenel’s baby mama Kathryn Dennis?”