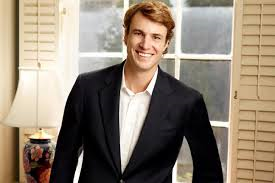 Occupation: Professional Raconteur. He also worked for his dad’s friend doing commercial real estate development around Savannah and Bluffton in 2008. He is working on opening a restaurant in Charleston called the Palace Hotel aka his gourmet hotdog dive bar, downtown on the East Side.

Education: He attended Hilton Head Preparatory School until 9th grade when he was sent to boarding school. He attended the University of Georgia and the Vanderbilt University School of Management.

Shep has 2 siblings Whitaker and Katherine. His father is William Rose II and his mother is Frances Rose.

Love that Shep was a “Dead Head”. He also lived in Athens, Georgia for 5 years.

This is my favorite quote from his Bravo bio page:

“After a brief interlude in Charleston post-college, where he had a girlfriend the entire time and generally behaved himself, he took his talents to Palm Beach because his father thought he was spinning his wheels professionally. It was here in South Florida that he vigorously worked in the resort development business and partied with some ridiculous and highly entertaining aristocrats in the consequence-free environment of Palm Beach Island.”

Apparently he also received an internship in Dubai. And something happened in the fall of 2008 “that sent him into a personal and professional tailspin, as he returned to his place of origin in Hilton Head and took to the age old comforts of the bottle.”

I’m not sure what that means but it certainly is has us intrigued. Sounds like someone blew their money and was forced to move closer to home in Charleston, S.C. “Cut-off” Maybe? I don’t know.

The state dog is named after his family— the Boykin Spaniel

His uncle is B. Boykin Rose, a famous Charleston community leader. The family owns some very valuable land in the historical area of Boykin, South Carolina