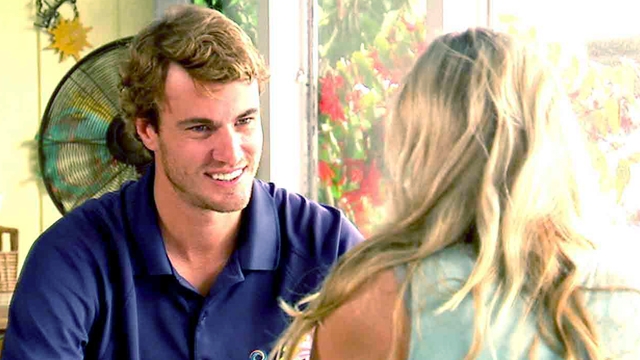 Bravo’s new reality show Southern Charm just ended and it left us wondering about some lingering situations. One of those situations involved 34-year-old raconteur, Shep Rose and his 29-year-old ex-girlfriend Danni Baird.

It became obvious that the two still had some serious chemistry–and Danni was really still hoping that Shep would outgrow his Peter Pan syndrome and realize he was ready to settle down. But the situation was left unresolved as the season ended a week ago.

On episode 2 Danni meets up with T-Rav in Edisto for a polo lesson and it seemed pretty obvious that she was not in to Thomas and likely had feelings for someone else–maybe an ex. Meanwhile Thomas is pining away for Danni, planning more dates and taking French lessons.

Then on episode 2 Danni has lunch with ex-boyfriend Shep and tells him about her very awkward date with Thomas (obviously hoping to get a reaction out of him–every girls knows that trick) and she subtly expresses some feelings to him hinting that maybe there is still something in the future for them if Shep can just get his $h!t together. And you can see why Danni thought there was a chance.

In Shep’s ITM he claims:

Danni says to him:

“When we were together the reason things didn’t work is because you were in a place where you didn’t want to settle down.”

Danni suggests that with MJ (the new girl that he has a crush on) he will be “in the same place he was with her”, suggesting the problem was with Shep’s commitment phobia.

He then says to her:

“I wasn’t foolin’ around when we were together”

Again, you can see how this could give her hope.

And Shep, for all of his partying doesn’t really have a history of being a big Playboy. He said:

“I’ve only had a handful of girlfriends in my life” and “I would never date someone that I wouldn’t possibly marry”.

So the fact that he did date Danni suggests that he was serious about her.

And Shep certainly seemed very interested in MJ saying “MJ is girlfriend material” — so he is not “opposed” to having a girlfriend. But it also becomes clear that Shep likes a challenge and perhaps Danni wasn’t providing that. He also said that he “needs” a lot of attention.

“Im needy and need someone to listen to me all the time.”

Voice of reason, Cameran Eubanks, suggested these two were meant for each other, and many others thought getting back together was inevitable. So what happened?!! Shouldn’t these two be together now?

On the Reunion Shep articulated that he simply did not have those kind of feelings for Danni. Of course everyone, including us, was really hoping that was just a front. But it looks like, sadly that door has closed…..

Danni tweeted this to her followers asking about a possible relationship…