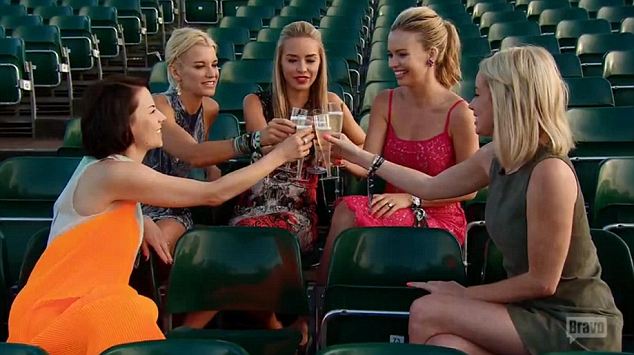 LONDON…..IS…..CALLING!!!!! So tonight the The Real Housewives of London….I’m sorry, I mean Ladies of London, premiered on Bravo with its first episode titled, “My Fair Ladies of London.”
I have been anxiously awaiting the premiere of this show for weeks! One of the things that most intrigues me about the new series is the distinguished cast!

In the US, the Real Housewives rarely casts really prominent, well-known women (although that has changed a bit in the last few seasons), but we also don’t really have a cast-like system or royalty like the U.K. does.

But these Ladies have s-e-r-i-o-u-s pedigrees! — particularly the two British ladies.

First we are introduced to 38 year-old Personal stylist, Entrepreneur, Caroline Stanbury, my personal favorite. Caroline’s one-liners are priceless. She’s kind of a bitch but knows it and that’s what makes her so lovable. Caroline is also quite a heavy hitter in London society and has been for years.

She is married to Turkish financier, Cem Habib, and is the daughter of Venture capitalist Antony Stanbury and heir to the Vestey dynasty. Caroline’s gonna be a situation for sure.

There also definitely appears to be a hierarchy with these ladies which is not as obvious with the American housewives. The American woman on the show are seriously struggling to earn respect in this socially immobile society and you can tell it’s not been an easy ride.

So next we meet American model Caprice Bourret, 42 who came here 17 years ago but somehow has sort of an English accent. Caprice was a pin-up girl years ago and enjoys her sort of soft p0rn icon status. Caprice loves London society and she loves how London society “LOVES” her aka how London boys have been “wanking off” to her photos for years.

She is also pregnant BTW with her boyfriends baby! Caprice is actually friends with the infamous Scot Young who is engaged to 30-year-old Noelle Reno.

So we see Noelle and Caprice meeting to chat. Noelle met Scot Young through her ex fiance (flow chart please!) and he proposed within in 3 months of knowing her. Noelle laments that they have been trying to get married for 4 yrs but hasn’t happened because of the very onerous divorce Scot is undergoing–more on that messy situation.

Noelle is seeking some advice from Caprice on how to climb London’s social ladder which is kind of funny because I’m not really sure Caprice has climbed London’s social ladder. Caprice is certainly famous in London, but I’m not sure her “pin-up girl” status holds a candle to the actual royalty status of the British bluebloods on the show.

I mean on the one hand we have Annabelle who dated Nathan Rothschild and on the other hand we have Caprice who dated David Spade. She is still way ahead of me, but I’m just not sure there is a comparison here.

Then cut to  Orange County girl Marissa Hermer , 32 who is married to Matt Hermer who runs London’s famous Boujis night club. The other ladies are quick to let us know that Marissa’s value in London’s high society hinges solely upon her famous husband whose world-renowned night club has a secret entrance for the royal family.

Marissa claims that Caroline “is the darling of London society” in her ITM.

The crew heads to a polo match and the American newcomers are awkwardly overdressed. There is a particular situation with a hat which is amazing, You knew there would be a fascinator situation right out of the gate. It looks like Noelle is trying really hard to cozy up to Caroline.

Caroline and Annabelle are definitely at the top of this ‘cast’ system although I am still unclear on who is actually on the top– but don’t let their pedigrees fool you–they both have mouths like sailors!

The two bust out some amazing one-liners in their ITMs about the Americans and their outfits at the polo match! Annabelle calls the American castmembers “three dogs”–amazing!

British socialite and model Annabelle Neilson, 45 may be at the top of this pyramid. Annabelle has a fascinating bio. She was married to global banking magnet Nathaniel Rothschild— I don’t know if anyone can beat that. She was also really close to Alexander McQueen and has been quite a hermit since his tragic suicide a few years ago.

Then we met Americans Julie Montagu, 41 and Juliet Angus, 38 and quiet honestly I don’t remember what they did in this episode!

But I know Juliet has some serious Hollywood connections.

In her ITM she claims, “Lindsay Lohan was a great friend of mine, we’d go to clubs and sit next to Leo DiCaprio, and I just happened to be one of them.”

So anyhoo, you can see where this storyline is going. It’s a docu-drama about American wannabe socialites trying to fit in to London society and you can tell it’s gonna be a rough ride!