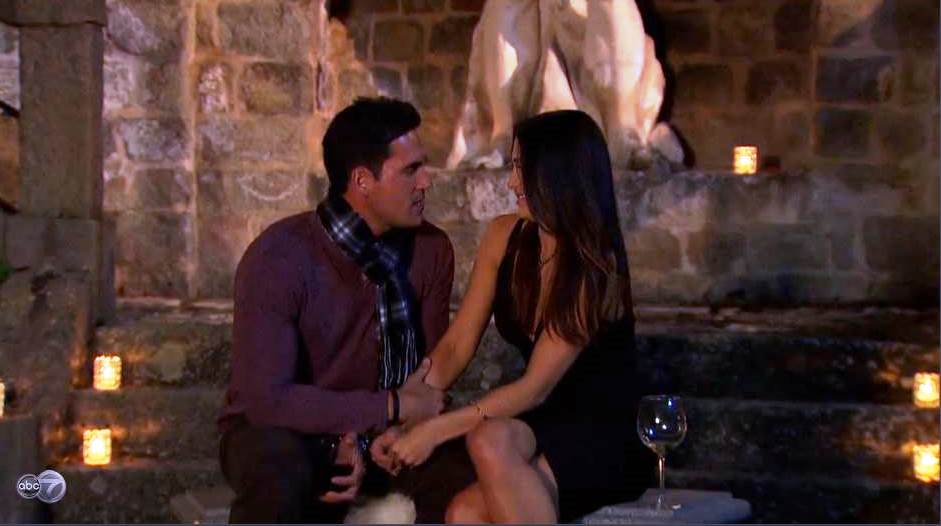 Phew! Another successful Bachelorette journey ends in engagement and a Neil Lane ring!

When Andi Dorfman first met Josh, she claimed in her ITM, “Josh M. is my type; nailed it, pegged it.”

I knew when I saw Nick Viall meet with Andi’s mom Patti that he was a gonner. Andi’s mom looked crushed by Nick’s profession of undying love for his daughter, because she knew it was not going to end well for him and she was right.

Hy looked all business with Nick…like he was just going through the motions.

By contrast, both looked thrilled when they met with the Josh Murray . I think someone probably gave her family a heads up on the winner. Plus Josh and Hy had matching outfits on which always bodes well.

So tonight Andi had some more one on one time in the Dominican Republic with her beaus. Josh and Andi went for a boat ride. Andi is still freaked out by Josh and worried he is “too good to be true”. So she wants some more reassurance. The Enneagram 1 needs certainty and reassurance and they will begin to perseverate on all the things that could go wrong. Luckily Josh does reassure her….”There’s no changing my feelings.”

“I don’t know what it was about Josh M. but I immediately called him out for not being as shy as he claimed. He’s obviously handsome and has a great smile, but there was something there I needed to figure out.”

Andi cried when she visited Nick Viall to tell him he wasn’t her choice.

Nick claims that he never saw the break-up coming, and told her he woke up that morning feeling confident about them.

But Andi was confident in her final decision and the final rose ceremony with Josh was amazing!

ABC gets an A+ for making this match! I think these two just might make it!

Have you seen the famous video of Nick bashing Josh on his plan ride home? Here it is.

Will these two make it?