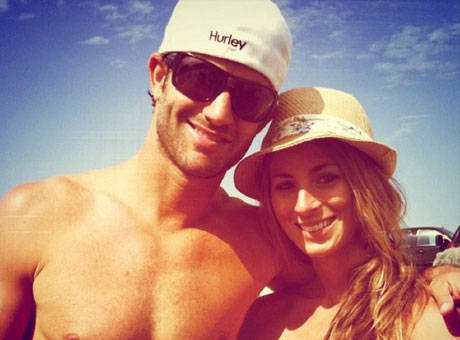 One of our favorite Bachelor Nation couples to keep tabs on is Kiptyn Locke and Tenley Molzahn especially because the cute couple lives right here is San Diego!

The two met on The Bachelor Pad in 2010 and have definitely been a favorite among fans–I mean they don’t even need to be identified by last names! Just say Kiptyn and Tenley and millions of people know who you are talking about!–ABC’s Disney couple! –which is quite appropriate considering ABC is owned by Disney.

I have to confess I have been concerned about this pair from the get go. I’m just not sure there is enough Yin to the other’s Yang. They are a bit too perfect if you know what I mean–which is great in friendships, but not so great when you need to have some serious chemistry!

The two first broke up in March of 2013, but I happened to notice some telling tweets in my Twitter feed lately–mostly pics of Kiptyn with other ladies and without Tenley. So I took a peek at his twitter feeds and Tenley’s and there has been no interaction between the two or photos of them in months. I saw Kiptyn went to the Del Mar racetrack yesterday with Roberto Martinez–no Tenley—coulda been a guys day out but scanning through weeks of tweets on his page and on Tenley’s. And Tenley’s page is a lot of inspirational “hang in there” kind of quotes. I’m afraid this may be the end for ABC’s Disney couple.

Why did Kiptyn and Tenley break up?