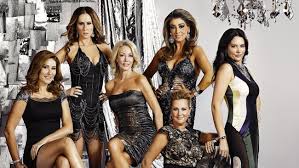 I just discovered The Real Housewives of Melbourne, and it is amazing! I’d say it was kind of a cross between Muriel’s Wedding, Ab Fab and Ru Paul’s Drag Race.

When is the Real Housewives of Melbourne on? Sundays 12/11c Bravo

It is interesting to see this international version of RHO after seeing Bravo’s Ladies of London. The Australian women are certainly bitchy and ridiculous enough to compete with their US counterparts, but not quite as put together with their outfits and pretty sauce.

Lydia Schiavello is an actual “housewife” living in Malvern. She stays at home studying interior design and caring for her two boys, one girl and three step-children and hitting on one of her step sons. The 45-year old is married to a famous architect, Andrew Norbury.

I love that she has a “snow home” as she calls it in Thredbo – complete with her own private plane.

Then we met 47-year-old Barrister Gina Liano of South Yarra. So I THINK she was joking when she called herself a drag queen but I have to be honest I wasn’t quite sure. She lays the pretty sauce on pretty thick so I will keep my mind open until I have confirmation that she was born a “biological woman”.

All joking aside Gina has a pretty impressive resume as an Australian attorney. I LOVED that she threw a wig on with her pumps and a judges robe to go to work! I wish attorneys here dressed like that! Sigh. She is the single mom of 2 boys and is a cancer survivor. She also has a mysterious boyfriend who lives overseas and according to the psychic Jackie is cheating on her.

Jackie Gillies was sort of mesmerizing with her bio as a psychic medium and wife of Australian rock royalty Silverchair’s drummer Ben Gillies.

She is a straight shooter and will undoubtedly shake things up on the show. But she didn’t always live in the lap of luxury. She grew up very poor–the daughter of very strict Croatian immigrants.

Janet Roach is a property developer an mother to two sons.