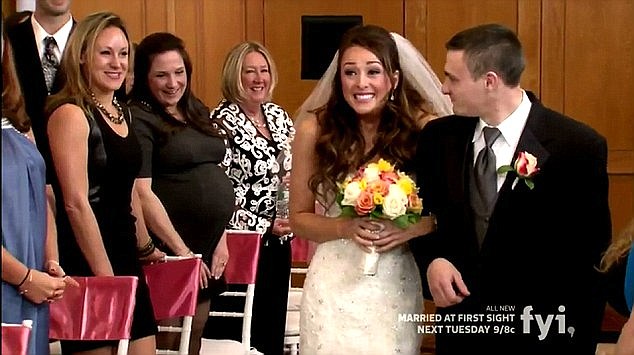 Doug Hehner and Jamie Otis just came out and let the world know that they are together and in love! Despite a very cringe-worthy start at the altar this couple fell in love on FYI’s controversial reality series ‘Married at First Sight’  where professional Matchmakers Dr Pepper Schwartz,  Greg Epstein, Dr Logan Levkoff and  Dr Joseph Cilona paired up the three couples based on an arsenal of scientific data.

And now the 27-year-old Registered Nurse and her 31-year-old commercial sales rep husband can come out and tell the world! It must have been tough for the two to keep their secret for this long. And in fact they may have accidentally dropped a few hints on social media like when Doug photo-bombed a photo with Jamie on Twitter, but the official declaration and decision has been made!

And now a blissfully happy Jamie is gushing about her new life-partner on Twitter.

Jamie and Doug were one of the most interesting and difficult couples because Jamie was not attracted to Doug at all at “first sight” and we thought we would be watching 5 weeks of Jamie awkwardly pushing Doug away. At the end of the show the couple still had not had sex, but rest assured that has all changed now!

The couple will appear on GMA tomorrow morning and we can not wait to watch!

And good news fans, the show has been renewed for a second season!

Doug and Jamie moving in together and starting a family