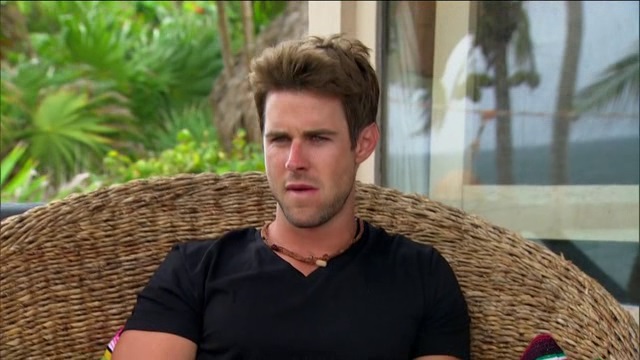 Bachelor in Paradise contestant, 31-year-old entrepreneur Robert Graham seemed obsessed with 27-year-old Junior Art Director  Sarah Herron for the last few episodes of Bachelor in Paradise. He even seriously cock-blocked Brooks Forester and kept him from asking Sarah out. And Sarah even confessed that she had actually come on the show to meet Brooks. But Sarah decided to stick with Robert and was won over by his persistence and affection. So the fact that the Fantasy Suite went so horribly wrong was shocking.

Once Robert got to the FS he “barely touched” Sarah. And really I get that he may not have wanted to have sex right away but how ’bout a little touching? Nothing. So naturally Sarah was crushed and the experience led her dump Robert. It also led many people to wonder if Robert was just leading Sarah on to get to the end? I mean Sarah commented that Robert slept in his jeans and went straight to bed! OUCH!!!

So was Robert gay? Or was he just playing the game to “win”? Remember Chris told the contestants there would be a “twist” as in a reward perhaps, but in fact there was no twist. No grand prize of 1000s of dollars, just love. So he may be thinking there is a pot of gold if he stays in the game.

Here is what Chris Harrison said in a tv guide interview:

“Robert seemed surprised by Sarah’s reaction? Do you think he was clueless or just pretending he liked her for the cameras? Harrison: The one bad thing about the show is that the network couldn’t assure it would be a success so we didn’t allow for a “Tell All” special. Unfortunately, there are so many things that I want to discuss — forget the audience, that I want to know! This is one of them. I want to know from Robert where this came from [because] guys don’t wear jeans to bed. That’s not normal. I talked to Sarah about it off-camera and she put herself out there.”

“So was Robert just saying what he needed to say on-camera to look like the good guy? Or was he just leading her on? Honestly, for his sake, I hope that’s the case because if it’s a Weird Science moment where they’re in the shower with Kelly Lebrock and their clothes on it’s incredibly awkward for a grown adult man. And by the way this wasn’t about sex. People will [say] Robert shouldn’t have to have sex with her to validate it, but it was the intimacy; he wasn’t emotionally available. Either he wasn’t in to her or there’s something wrong.”

Here is an interview in Glamour magazine where Robert talks about his ex-girlfriend….

The Robert Graham gay rumors after the Fantasy Suite catastrophe

4 thoughts on “Was Robert Graham gay or just pretending to like Sarah Herron for cameras?”