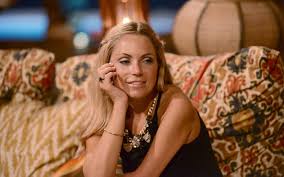 A lot of people are wondering if Bachelor in Paradise contestant Sarah Herron is regretting her decision to dump BiP beau Robert Graham after being disappointed in their Fantasy Suite time.

Sarah was stunned when her and Robert got time off-camera and Robert rejected her physical advances. She claimed: “I wanted to be awake all night, getting to know Robert and Robert getting to know me. And that didn’t happen. At all,” she explains. “I felt rejected. Robert didn’t want to be physical with me…I want to be leaving Paradise in love, but right now I’m not feeling that way.”

Sarah related to Robert: “Last night was not really how I would have envisioned time with you in the Fantasy Suite,” …. “I don’t feel like you’re excited about me.”

And interestingly Robert replies: “I liked taking it slow with Sarah, and I liked building a relationship with her…I kept using the phrase ‘I like you’ because I’m a little scared,” ….. “It’s hard for me to tell people that I love them, but I gave it my best shot. I guess it just wasn’t enough.”

So, a lot of people think Sarah was too impulsive and sensitive and should have given Robert a chance and it looks like Sarah is also starting to feel the same way.

Here is what Sarah had to say in her Parade Magazine blog:

“After several hours of going stir-crazy and watching our friends’ luggage disappear from our room, I decided I couldn’t wait to hear from Robert any longer. What you didn’t see is the part where I went to his bungalow and told him point blank, “I’m not packing my bags. I’m staying here for you and I hope you’re in.” Good news, he was in. You can’t believe the weight this lifted off my shoulders and the confidence it gave me to know that Robert and I were on the same page. Later that night, Chris arrived (again) to tell us the three remaining couples would now be going on over-night fantasy suite dates.”……

She goes on to explain her doubts about dumping Robert….

“Breaking up with Robert broke my heart (twice). If this had happened back in L.A., I probably would have had a conversation with Robert and tried to work it out instead of impulsively dumping him. But Chris Harrison takes no prisoners and there was no time for “working it out.” Admittedly, by my seventh word in, I wondered if I had just made the biggest mistake of my life. Had I overanalyzed the situation and let the pressure of Chris’s ultimatum impair my judgment? Here I am looking at a smart, funny, genuine man who has treated me so well, yet I am making him cry. It sucked. This was a man who took me swimming every day, brought me ice cream, sent me sweet notes, called me his “bae,” and protected me from every new guy that entered Paradise… and he’s suddenly not enough. What’s wrong with me!? I’m still not sure, but I know I wanted him to fight back.”