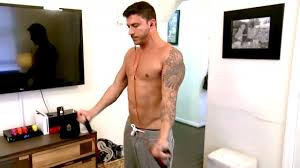 One of the things that makes Vanderpump Rules such an interesting show is that the characters have a real history together that we the viewers never saw. The friendships are real and so are the fights. Jax Taylor and Tom Sandoval have been friends for years. In fact remember on WWHL last season when Tom called threatening to expose something from Jax’ past in Miami?

And they must have had a history together in order for them to overcome so much betrayal in their friendship.

“When you have your one on one interviews for the show Tom seems to say some pretty brutal things about you, you ever take it to heart. I love your friendship with the boys, you are like brothers, I’m happy you’ve patched it up? So second question what’s the best adventure you’ve had wit the boys?”

“Modeling in Florida was circa 2001, it’s very different today, the modeling world has changed a lot. It was fun. that’s how I met Tom. We became best friends from our modeling days when we were younger. It was fun, meeting a lot of designers, photographers, editors…”

“We’ve had a LOT. Our Vegas trips are always fun. Our New York trips are always fun. The best times we have are when we go to someone’s apartment and BBQ and drink beers together. Tom does say somethings that are negative to me, but I deserve everything he says. It’s his way of venting. I know deep down inside he doesn’t mean what he says. And sometimes these are things I need to hear. And I know he says it out of the goodness of his heart. He’s not mean, he’s not brutally attacking me. It’s just like an “enough’s enough” and I get it.”

We all know Jax has a bit of an impulse control problem when it comes to getting tattoos. In fact he had both Stassi Schroeder’s name, and Carmen Dickman’s name tattooed on his body.

In regards to all the tattoos that he now has to have removed he said this:

“I wasn’t drunk when I got those tattoos. But that’s very true, I wear my heart on my sleeve.”