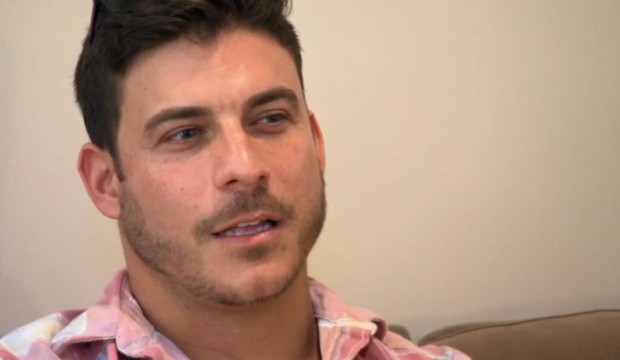 WOW!! It’s funny that of all people the gay rumors circulate around the guy who has had sex with the most women and is an admitted sex addict… Jax Taylor. We first heard about the gay rumors last year. There were photos of model and actor / producer Vincent De Paul and Jax Taylor labeled “boyfriends” circulating on the internet. BTW Vincent just addressed the rumors.

There was even speculation that he had hooked up with Magic Mike Channing Tatum since the two used to be roommates but next week on Vanderpump Rules it looks like the rumors get really hot as a visitor arrives from Jax’ mysterious past.

A preview shows the mystery man named John whispering to Jax telling him that he still loves him. Tom Sandoval claims that there were rumors about Jax and John when they lived in Miami. And that those rumors explain why he changed his name from Jax Taylor to Jason Cauchi.

It’s all starting to add up. I recall last year on WWHL Jax was on the show…Tom Sandoval called in and started dishing some dirt on Jax in Miami and he was immediately cut off. He has also been threatening Jax for some time about some “secrets” he knows about him. Tom and Jax modeled together in Miami BTW—that’s actually how they met.

In case you don’t recall Tom Sandoval said this:

“The whole season you made it pretty much your job to throw me under the bus and you know I have like all this dirt, stuff that I know about you.”  Andy responds, “there’s worse stuff?!”  Tom continues, “didn’t that ever cross your mind when you were throwing me under the bus? I’m curious as to if you want to answer that. Why did you move from Miami to L.A. and change your name from Jason to Jax?”

I think Monday we may find out. (UPDATE 1/12/2015: Here is a pic of Sugar Daddy and details on their relationship).

We also saw host Andy Cohen make a comment last week suggesting he is pretty sure that Jax has been with guys before.

There was also a photo circulating of Jax Taylor at LA Fashion Week in October 2007 with apparent actor Vincent de Paul.

So my question is did Jax consent to having this exposed? Or did was Tom so tired of being thrown under the bus by Jax that he sent the Bravo team on a quest to find “John”?

Chris Soules weighs in on his first rose ceremony

Ali Fedotowsky claims Britt Nilsson will be the Next ABC 'Bachelorette'