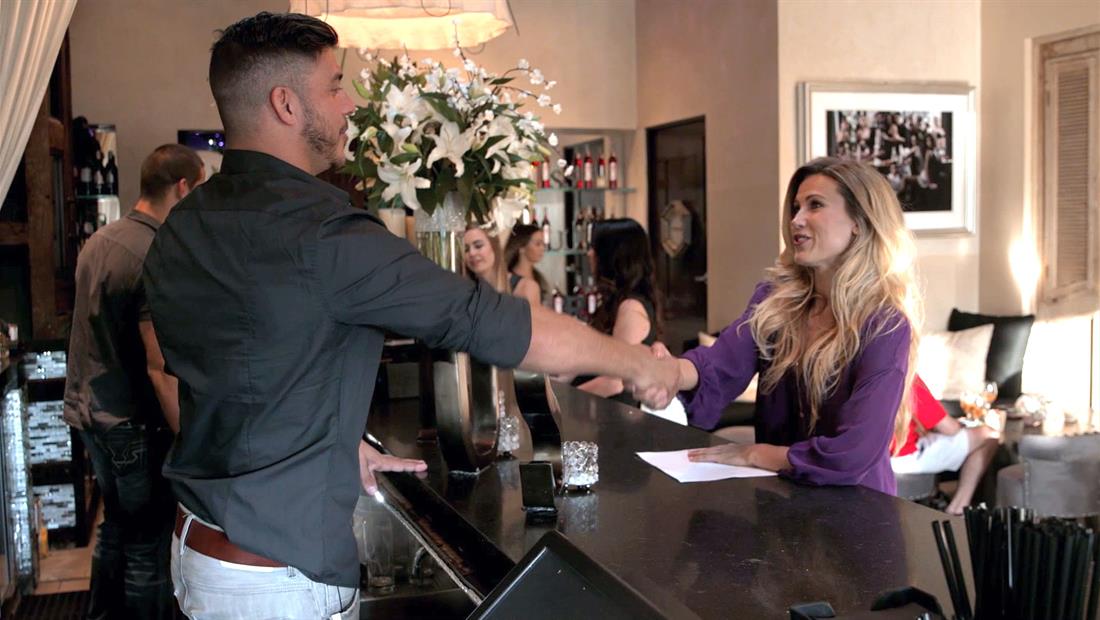 Last year gay Pride at SUR was epic because the Queen Bee of West Hollywood, Lisa Vanderpump did what she does best, pimped out her stunning staff on a gorgeous pink float in the parade. This year with the opening of her new bar PUMP that task seemed a bit too daunting—so she scaled it back a bit and just held some Pride party’s at SUR and PUMP.

I was stunned at how quiet things appeared at SUR and PUMP over pride. Actually I had just been to both a week ago and saw their exact locations and proximity to the route. PUMP is right on the main ‘drag’ while SUR is tucked away a bit. Both were very busy. But why was business slower this year?

Anyhoo, last night Stassi Schroeder did what she does best—- inserted herself into the business of others and confronted poor Tom Schwartz about remaining friends with bad-boy Jax Taylor –poor Tom did not have a chance.

It looks like Stassi was the self-appointed go between between Tom Schwartz and Katie Maloney since Stassi is a professional at confrontation and neither Tom nor Katie are quite as advanced. But Tom was not willing to ‘quit’ Jax. There’s no way.

Those two are head over heels in love. And Katie better be careful because if she forces Tom to make a choice he will for sure choose boyfriend Jax.

Tom Schwartz tried to smooth things over with Katie with flowers but Stassi began the inquisition immediately and grilled Tom mercilessly over cheating with Jax’ friend and over staying friends with Jax until Schwartz ran out of Stassi’s apartment with his tail between his legs.

(No wonder the cast members refuse to film with Stassi!) The good news is that this drama is real. Kristen is clearly not over Tom and is really raising the threat level against Ariana by getting all dipped in pretty sauce and wearing a dress that will guarantee a nip slip.

Boyfriend James Kennedy seemed a tad bit jealous but I think he is really thinking ‘how much longer do I have to pretend to be into this girl to get a full-time role on this show?’

Even Tom Schwartz is uncomfortable with how hard Kristen is trying and how little she is wearing!

Kristen is really hung up on accusing Tom of sleeping with Ariana Madix and getting him to admit it (which kind of seems like a moot point now, right?) He will not and just wants her to leave him and Ariana alone even gushing about how happy he and Ariana are together.

She is blonde and gorgeous and pulled together. She shows up to her interview in jeans but somehow her casual attire didn’t seem inappropriate. It seemed more like “I am too good for this job—I got a call from my agent to take this role — and I don’t want anyone to think I am actually trying to get hired here”.

I love that she arrived and went straight to Jax to ask where to go for her interview. I’m sure that wasn’t planned by producers!

One look at her resume and you see why she felt so confident.

Her name is Vail Bloom and she is an actress best known for her role on The Young and the Restless and has been in a slew of movies and Television shows.

She tells Lisa she is just a struggling actress and needs to make some money, but it’s hard to believe that if Vanderpump Rules was not being filmed there that she would be applying for a hostess job anywhere.
Lisa hires her on the spot but claims that she is too good for the job and won’t last — aka you better cause some drama and hook up with a co-star or you’re outta here.

Vail seemed a bit too good to be true with a Princeton Degree and long acting profile, but she confides in Lisa that she had a serious problem with drugs for years in the business after showing up late to one of her first shifts!

Lisa warns Vail about all of the trouble that she could get into at SUR and asks her about drinking. Vail says drinking is not her vice, but drugs are.

“I was on The Young and the Restless for just under three years and I was starting to get into this whole like … what seemed like the Hollywood lifestyle, and I was starting to get into a little bit of trouble with drugs. Obviously, I’m doing well now. I meditate twice a day. I have myself together, but I certainly have a history. It just made the lows, really low. I always have to be kind of on guard and not surround myself with people that [would take me down the wrong path] … I’m strong, but I don’t want to be subjecting myself to it all the time.”

The confession makes her a little more human and likable and makes the idea that she would take the job a tad bit more believable.

Lisa of course warns Vail about Jax (as if Lisa isn’t doing everything in her power to get Jax to sleep with her and stir up some drama). And previews suggest that she and Jax will have a bit of a connection. But I don’t think it will really last because Jax is all about Carmen on Twitter now. I predict Vail won’t stay at SUR. I think she will quit before the season ends. Stay tuned!