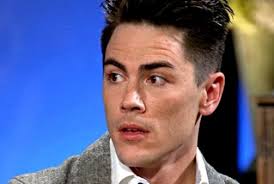 Tom is a bartender at SUR and the boyfriend of fellow cast member Kristen Doute. Tom and Kristen bring the drama this season after Tom admittedly cheats on Kristen with a girl in Las Vegas. Tom is an aspiring actor and model and plays guitar in a band called Pierce the Arrow.

He started modeling when he was 15 years old in St. Louis.

His parents are divorced and his mom was a fire fighter for 28 years.

Tom Sandoval had a lead role in the 2008 film Playing with Fire as Miles Butler. He also appears in season 1, episode 8 of The Hills during a Teen Vogue casting interview.

His girlfriend Kristen Doute appears in the movie 23 Minutes to Sunrise with her boyfriend Tom alongside Eric Roberts. Check out Tom and Kristen’s acting chops.

The big cheating scandal this season of Vanderpump Rules appears to involve Kristen Doute and Tom Sandoval. Tom allegedly cheated on Kristen during a trip to as Vegas. What is up with this cast and Las Vegas cheating scandals!

In a preview clip Kristen tells Stassi that Tom hooked up multiple times with the girl over many days. Yikes!

This is no doubt going to be a big situation this season. Kristen says:

“It’s not like he had this drunken moment and f—ked her once, which still isn’t okay.” … “It was, like, two days.”

“Vegas skank tweeted about screwing my boyfriend,” … “[Tom and I] share a phone bill, so I looked through Tom’s outgoing calls, found some Vegas numbers. Katie, Stassi, and I started hunting, making some phone calls, land on said whore, and we caught him red-handed.”

Time will tell if we get to meet this “skank”.

Ariana is the new server at SUR and apparently has some sort of history with Tom. She is being transfered from Villa Blanca and is best friends with Scheanna.

Tom Sandoval Net worth and salary