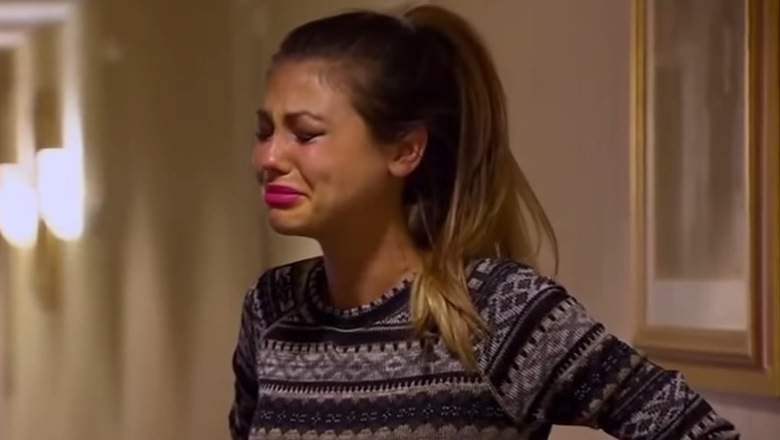 We were wrong!!!!!!!!!! At least about the part where 27-year-old Hollywood waitress Britt Nilsson officially walks off The Bachelor. I felt certain she would leave of her own accord because she sooo obviously was not that in to 33-year-old Chris Soules and was so obviously trying everything to get Chris to give her the boot.

In fact it was exhausting watching Britt flip flop and backtrack about wanting to be in a relationship and wanting to live in Arlington Iowa, and wanting Chris to meet her family, etc, etc. If it’s not that then she has Borderline Personality Disorder because the flip flopping was pathological for sure circa Courtney Robertson. So I hope for her sake it’s option #1.

Britt pulls Chris aside at the cocktail party on Sunday night where Chris tells her that the other girls were telling him that she wasn’t being honest with him. Britt starts to backtrack on the things she has said about Arlington.

“I like to reinvent myself. This is a good thing to try.” This is after she told the girls:

“I’m trying to picture myself living here,” ….. “It’s just so much smaller than I thought it’d be.”

BTW Chris gave the group date rose to Kaitlyn Bristowe which made things much worse.

Chris Soules was obviously super in to Britt but Chris also, unlike a lot of previous Bachelors–Ben Flajnik–a-hem, listens to the women when they tell him stuff about the other girls.

Britt begins grilling Chris about “who” told him she was being dishonest. Oh NO Britt, no, no, no. Chris is not gonna fall for that after what happened in the Badlands. The best you are gonna get is ‘the girls’. But Britt seems sure that it is Carly and she is correct!

Chris then shows that he actually does have some balls and tells Britt that her behavior is not a character trait he wants in a wife. OUCH!!!! And then gives her the boot.

She kept cornering Chris and essentially demanding that he break the rules and tell her she was number one–even in front of the other girls! The demands were so ludicrous it felt like an obvious ploy to get Chris to dump her. Why would she do that and not simply walk-off? Because she knows if she wants to be The Bachelorette she needs to be very sympathetic to the viewers. She would not be that sympathetic if she just said “eh, not that into you…see ya.” So it was important that Chris dump her.

But I think her over-thinking and over-strategizing back-fired because after tonight’s performance I don’t think she has a chance at being The Bachelorette.

I don’t know. To me the meltdown was not about Chris at all. It was an audition for the lead role of The Bachelorette and it was an epic fail which is a shame because I actually thought she would have been an excellent lead.

Britt did take to Instagram to try and do some damage control:

“I’m not even going to address all of the things said about me except that I choose to forgive and love those people because I understand how intense of an environment we were all in, and viewers can plainly see that I tell Chris the truth every time. That speaks for itself and everything else will come and go. I also apologize for processing my emotions out loud when I should have waited for privacy. I ask for grace and forgiveness as well. Love you guys. Seriously!”

Oh well, at least she didn’t fall in love with a boom mic operator. Speaking of, hopefully the Bachelor limo driver will drive her back to the mansion and ABC will be send her immediately to Bachelor in Paradise where she can grill potential suitors about being #1 and Jade Roper can break the horrible news to suitors that she modelled for Playboy! Those two girls together on BiP will be an epic situation!