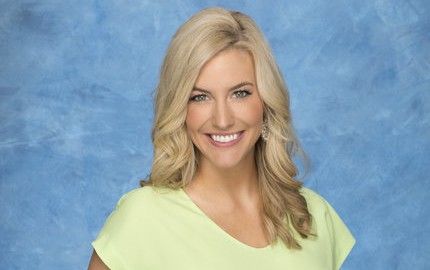 Whitney Bischoff is one of the four remaining Bachelor contestants who got lucky enough to see Chris Soules tiny Hometown of Arlington, Iowa. She also seemed the least horrified about the prospect of living there. The 29-year-old is a Fertility Nurse at the Fertility Centers of Illinois where she literally injects sperm into eggs and makes babies for people. So her Hometown Date last night was rather epic.

She took Chris to her work and gave him an in depth tour of the “Specimen Room” in Chicago–BTW everyone on Twitter is making jokes about how Chris should leave the nude photos of Jade Roper in the room…..of course. Whitney makes Chris feel like he is going to be required to leave a ‘specimen’ which strangely he does not really seem to object to.

Anyhow Whitney’s family is a bit of a ‘situation’. Earlier she warned Chris that she did not have parents.

So last night we learn that her dad is totally MIA and her mom died years ago during a routine surgery gone wrong. So Chris instead meets Whitney’s older sister Kimberly, brother-in-law, uncle and grandmother.

Whitney’s older sister was a bit of a ball buster though (haha, of course Chris made that joke during his ITM). She did not like the idea that Chris was dating multiple women while making a decision about which one to marry!—-the nerve of her.

Kimberly, like Britt, wanted Chris to break the rules and tell her right then and there that Whitney was the winner before she would give her approval. Obviously Chris’ contract prevented him from making such disclosures so no approval was given.

Whitney later drops the L bomb on Chris so he knows she is a sure thing.

Good to know before you make a final decision on a life-partner!