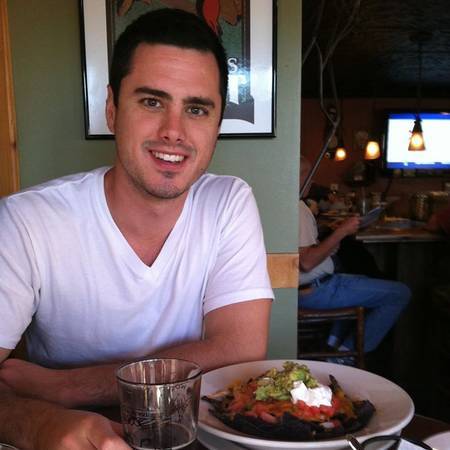 From my extensive research into Kaitlyn’s exes I believe she likes her men a little rough around the edges, thus a tattoo may give a guy an edge in this grueling competition. And Ben does have a total of ONE tattoo and it’s on his torso.

The tattoo is a series of words and thanks to an insider we now know what those words say.

Ben’s tattoo is a quote from the Bible–Old Testament Proverbs 16:3 — even his tattoo is clean cut! It says:

Commit to the Lord whatever you do, and he will establish your plans.

Well I guess “the lord” had a little chat with ABC and established plans for Ben to star on the show. Let’s see if the Lord takes him all the way to the finale.

Ben may be the most clean cut guy to star on the show since Christian and born again virgin Sean Lowe.

While in college he was the Director of Faith Based Affairs International Volunteer Head Quarters Volunteer in Cuzco, Peru and worked as an intern at the Warsaw Community Church.

My personal opinion is that Ben is too clean cut for Kaitlyn despite rumors that he may very well win.

But take heart if the clean cut Christian does not win the final rose I think there is a very good chance he will lead the next season of The Bachelor, particularly considering how successful Sean Lowe’s season was.

Is Ben Higgins really over his ex girlfriend?