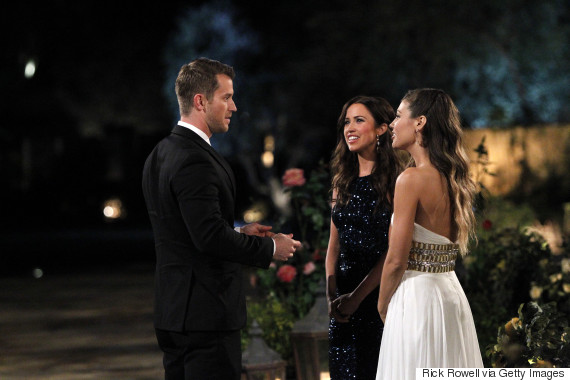 Tonight the limos and the cupcakes finally landed at the Bachelorette mansion and the 25 gentleman met their prospective future life partners: 30-year-old Vancouver Dance Instructor Kaitlyn Bristowe or 27-year-old Hollywood actress and waitress Britt Nilsson and the situations quickly began!

So for the first time in Bachelorette history the men had two lovely ladies to choose from which made the limo entrances a bit of an awkward situation. Each of the eligible suitors had to decide who to approach first – Britt or Kaitlyn.

And the ladies were strategically placed within earshot of one another so they could hear what each guy said to the other. Tonight set the record for number of times the word “situation” was used on the show, because the arrangement took the cake for most awkward situation in Bachelorette history!

Kaitlyn arrives in gun metal grey sequins and Britt arrives in a long Greek Goddess dress and I was really preoccupied and concerned that her white dress was dragging on the freshly hosed mansion driveway.

Ben Higgins is the first to emerge from the limo. And he is gorgeous and very charismatic, but did he really have to break out the “we both sponsor a child in poverty in a 3rd world country” line right out of the gate?

Brady Toops makes a bee-line for Britt. He is ALL about Britt. Immediately the two bond on their “faith” and talk about Nashville. He is a Christian singer-songwriter from Nashville, TN.

Ryan Beckett, 33, the realtor who owns a business with his ex-girlfriend and also dated a former PlayBoy Bunny, thought he was team Kaitlyn, but quickly changes to team Britt. Either way, MAJOR red flags!!!

Joshua Albers, a welder from a very small town in Utah welded a rose.

Ian Thomson regales us with a tragic story about a car accident where he was hit by a car and left for dead and told that he would never run again–cut to a shirtless shot of him running. He is way in to Kaitlyn.

Jared Haibon’s shtick, “Love Man,” is kind of a miss. It doesn’t seem to fit with his official job title: ”restaurant manager”.

JJ Lane III, 30 is a former investment banker, but more importantly he owns a lawn care business in Colorado and all I kept thinking was “this guy really could “plow your field anytime”.”” Instead JJ told Kaitlyn that as a huge hockey fan, he wants to “puck her” and handed her a puck. Wow! I wonder if he knows about her long history of dating professional hockey players ?

As in Nikki Ferrell’s ex-boyfriend Ryan McDill — He’s not too intoxicated when he first emerges from the limo, but as the night goes on he gets ridiculously drunk, strips down to a speedo, and jumps into the pool. This NEVER bodes well for any candidate.

He is understandably asked to leave and escorted out in the white van of shame — only after making several really inappropriate and politically incorrect comments.

BTW during Ryan’s epic disintegration he ran outside and angrily confronted Shawn Evans whom he had never even met, just because he drove up in the hot tub car!

The entrances are getting a bit ridic and bizarre….

Fitness trainer Justin Reich sucks helium from a balloon and talks about his son Aury. Dentist Chris Strandburg drives up in a cupcake car.

Josh Seiter is a stripper–what more is there to say?

Ben Zorn, 26, Football player from San Jose starts off with his heart-wrenching story about losing his mom at 14.

Tony Harris, 35 shows up with a black eye that he got taking his dog for a walk. He slipped on a hill BTW.

Kupah wins our biggest D-bag award for flipping a coin to decide who to choose. I am guessing he won’t last long.

Ben Higgins, 27, is a HUGE hit with Kaitlyn because he asks her about her tattoos.

Kaitlyn is accused of “cheating” by Britt because she runs into the house to say hi to the guys. Kaitlyn wants this bad!

Then the men head to the polls to vote and decide between the two candidates and a slew of jokes ensue about putting a rose in a girls “box”.

The show ends on a cliffhanger without telling us who the guys choose.