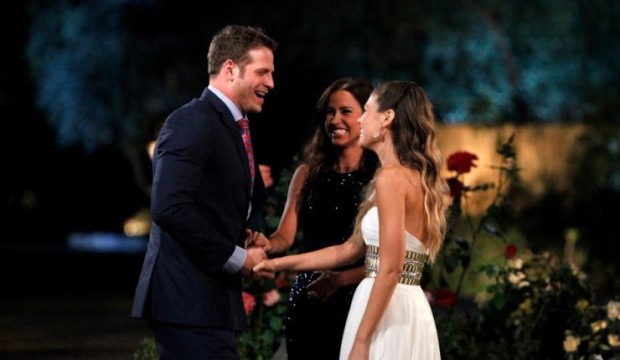 Tonight on the long awaited premiere of the Bachelorette we witnessed a slew of “situations”, but none as epic as the situation of Ryan McDill — and sadly for Nikki Ferrell, Ryan was her ex-boyfriend and he does not make her look like she knows how to pick men tonight.

27-year-old Ryan McDill from Blue Grass, MO has a few too many cocktails tonight and we know the Bachelorette bartender makes them strong! He gets embarrassingly drunk and makes some very inappropriate cringe worthy comments like….wait for it……………………..

He then strips down to a speedo, and jumps into the Bachelorette pool.

But in a really impressive maneuver he manages to jump out of the pool, beer in hand without spilling a drop. He also keeps reiterating that he is “all horned up”—and at some point he makes an inappropriate rape joke.

So the third wall COMES down and a production guy dressed in black steps in and asks Ryan to go outside and talk to Chris Harrison. Chris says:

“You are clearly not here for the right reasons. I really thinks its best if you go home”

He isn’t the first Bachelorette contestant to receive an escort out on night one. Remember Jonathan the 26-year-old lawyer from Hickory, N.C ? Oh if you don’t check it out. He also had a few too many cocktails and became drunk and belligerent about getting Desiree into the most amazing impromptu mini-Fantasy Suite that he set up at the Pad. He was also escorted out and left in the white van of shame.