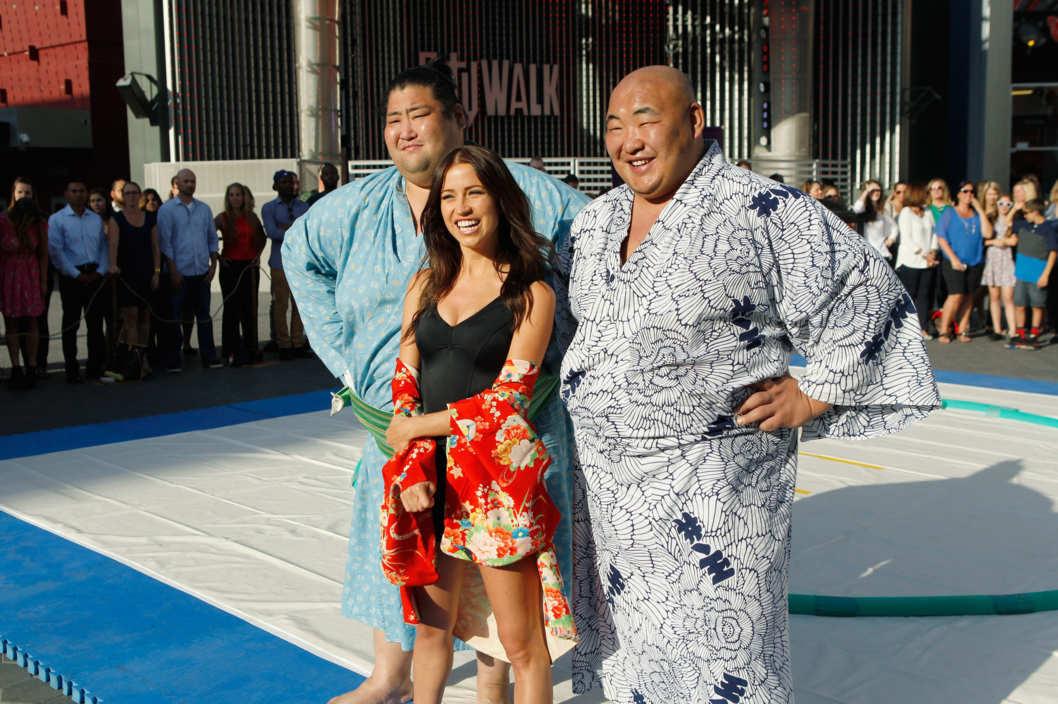 Monday night’s episode of The Bachelorette began where it left off with the very uncomfortable Kupah James situation as Kupah refused to go quietly—-or at all. After Kaitlyn Bristowe informed Kupah she was sending him home he had a meltdown in front of cameras during his exit ITM. He blasted Kaitlyn and even said he “didn’t even like her”. Kaitlyn heard him and stepped outside to confront him.
Kupah was eventually hauled off in the van of shame.
Kaitlyn went back and explained the situation to the other guys.
The rose ceremony ensues and Cory and Daniel were eliminated.

The guys were awakened the next morning to the terrifying sight of two giant Japanese sumo wrestlers in diapers banging a gong. Once again it was time to get physical, but this time in adult diapers at Universal Studios City Walk.

Healer Tony Harris protests the sumo wrestling date because he does not like violence of any kind. So after the lesson, Tony walked away and blasted Bristowe for choosing another violent competition. He returns later—— in an odd outfit—a cross between Sedona Arizona and Duck Dynasty—-to tell Kaitlyn that he was leaving. Needless to say Kaitlyn is not bummed in the least. If his reaction to the sumo didn’t kill his chances, the outfit did. So that is 2 self-eliminations thus far if you are keeping track.

The men battled it out on the mat and tried to maintain a shred of dignity in their adult diapers.  The pixilation during the competition was amazing.

Clint Arlis showed everyone that he was an experienced wrestler.
Unfortunately for Clint though his wrestling skills did not win him a rose. Once again Shawn Booth gets the group date rose followed by yet another make-out session and Bristowe tells the camera that being with Shawn B. “just feels right.”
Next professional duena, Chris Harrison chooses Ben Z for a Fear Factor one-on-one date with Kaitlyn. The two walk through a haunted warehouse with live snakes, a scorpion and maggots.
Afterwards Ben tells the tragic story of his mother dying of terminal cancel when he was just 14 and how he refused to cry because he needed to be strong and has never been able to cry since. Ben gets a rose.

The next group date is insane. Ben H., Jared, Jonathan, Joshua, Tanner, and Ryan B., head to an elementary school to teach a sex education class to very young kids. It was soooo uncomfortable. My initial thought was the producers of the show have officially lost it. This is sooooo inappropriate, but Kaitlyn reveals that the whole thing is a prank and the kids are child actors. Thank God or I think they would be scarred for life by Joshua Albers explanation of female menstruation.
Ben H. wins the competition for his skillful demonstration of ‘reproduction’. He gets a make-out session and wins the group date rose. Jared Haibon is a close second.
In the meantime another romance is brewing back at the mansion—the relationship between Clint and JJ. Clint claims in his ITM that he went on “The Bachelorette” to meet a woman, but ended up “falling in love with a man.” And later contends that he has to get a rose so he can continue to develop things with JJ. The other guys tell Kaitlyn and she is livid.

The show ends on a cliff-hanger with Kaitlyn about to break out a can of whoop-ass on Clint.