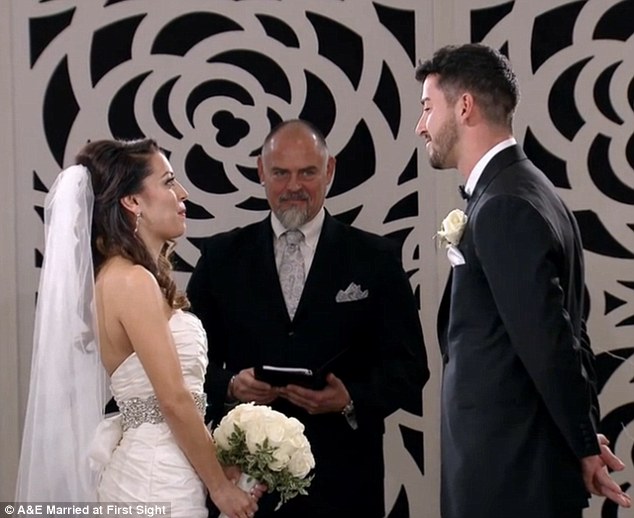 On Part 1 of the Married at First Sight’ Season 2 Reunion it was clear that 2 out of the 3 couples had parted ways, but it was not clear if 30-year-old vodka brand sales representative Jaclyn Methuen, and 28-year-old Long Island real estate agent Ryan Ranellone had decided to part ways or not.

Remember they seemed the least likely couple to make it. Initially Jaclyn said:

“The initial physical attraction really isn’t there right now” …. “when I saw him face to face I felt a little disappointed. It just doesn’t feel like this is the man who is my husband. I don’t know if I can do this.”

Well I think she probably would have walked without some coercion by producers. A show insider claims:

“Jaclyn was producer influenced to say yes. She really tried with Ryan but he was such a mamas boy he never spent one night in that apartment with her. He said he had anxiety and had to go home.  He went home every night. Or as she knows now some nights to his ex girlfriends house.  You wont see shots of them waking up together until decision day.”

Wow! Ryan Ranellone of all people seemed like the most stand up guy of all, but not if you believe the alleged insiders claims:

“Other lies Ryan has told come out such as he does not support his family. He never paid his mother money to live there. His mom would complain she wanted Ryan to move out because he ate all their food and never contributed money”.

Ryan responded to the accusations on Instagram by calling them “bullsh*t” and saying he’s “faithful.”

He added “By the way my ex lives back in canada. So take your rumor and shove it up your a**.”

Wow! So I want to know who hired these guys? The women seemed like great marriage material but the men were all fatally flawed. Someone needs to be fired.

“It feels like it’s the us against the world. We are supporting each other and we hope the truth is revealed soon. Tnx for the support. #MAFS.”

I agree the ladies are getting blasted unfairly this season. I hope the truth does come out and these 3 ladies get the respect and support they deserve for enduring this insane situation!