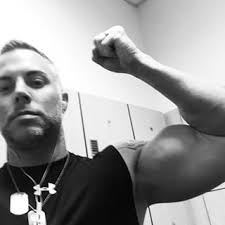 On Monday’s reunion episode of Married at First Sight 35-year-old Trauma nurse Sean Varricchio and 34-year-old biopharmaceutical sales rep Davina Kullar met up for the first time since their failed 6 week marriage. One very interesting piece of information to emerge from the Reunion was that they never consummated the marriage–in fact they were the only couple that did not have sex. Sean’s lack of interest in intimacy with Davina led a lot of folks to speculate that Sean was gay.

In fact a production insider claims:

“A lot of the crew said they knew people during filming that said Sean was gay and he was on an all gay bowling team called the Rainbow Rollers.”

The insider also said that Sean was never there.

“Davina was very kind from what I have seen. She’s not bitchy at all but someone has to be the villain edit. Sean was never there and when he was everything was about Sean. Producers came up with the moonpies and space idea for Sean. He didnt put much effort into things.”

It remains to be seen whether or not he goes that way or not, but something is off for sure. You are living with a gorgeous girl for 6-weeks, sleeping in the same bed and nothin’. I think Davina is owed an annulment for fraud regardless.