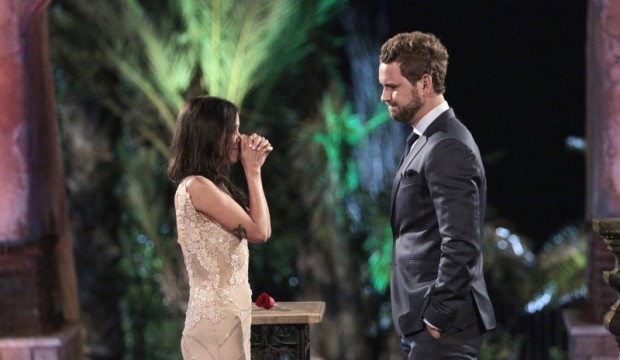 Tonight on After the Final Rose Kaitlyn Bristowe, 30 and Shawn Booth, 29 are allowed to emerge from 10 weeks of hiding and reveal that they are officially engaged. But first Kaitlyn has to confront runner up Nick Viall, 34 face to face for the first time since she rejected his proposal in May.

Nick is always fun to watch on ATFR because you never quite know what he will say. Last year he confronted Bachelorette Andi Dorfman for doing “fiance things” with him the night before the break up.

This season he seemed to be Ok with “fiance things”, but he was upset that Kaitlyn allowed him to pick out an engagement ring and write a proposal. Remember on season 10 he received the luxury of a pre-rose-ceremony break up by Andi Dorfman. In fact Andi never even let Nick pick out a ring.

‘I Will Never Get That Back.’

“You know, that day you wake up and you think you have all these reasons to be confident” …… “I don’t know when you finally knew [that you were sending me home] but you certainly knew when I got out of the limo. And I show up, and I start talking and I pause – and you kind of let me continue.”

I love that we always pretend like there is no production happening behind the scenes and contestants have the option of letting someone down early. They have allowed a lot of pre-rose ceremony break ups over the years but it sort of ruins the point of the show….but I digress.

“I just felt like those words that I said to you, once you knew, they were no longer meant for you. They were meant for someone that felt the same way that I felt about them,” he continues. “That moment I had – those words I said to you – I will never get that back.”

Well when you go on a show called The Bachelorette you kind of have to accept that there is a very real possibility that you will propose to someone and be rejected.

Anyhow he goes on….

“I just don’t quite understand what the heck you were thinking,” ….”Like, ‘Well there’s no good way but this is the best way to break his heart’?”

Bristowe responds as though this is real life and she had the option of dumping him earlier….

“I did [care for him deeply] and it was excruciating,” said Bristowe. “A part of me thought, should I go to you in the morning? Or will it be just as hard five hours later? I didn’t really know. … When I look back, I’m like, should I have done it a different way?”

Kaitlyn does admit she should have done things differently….

“Yes, I probably should have,” she said. “But at the same time I had so many thoughts going through my head.”