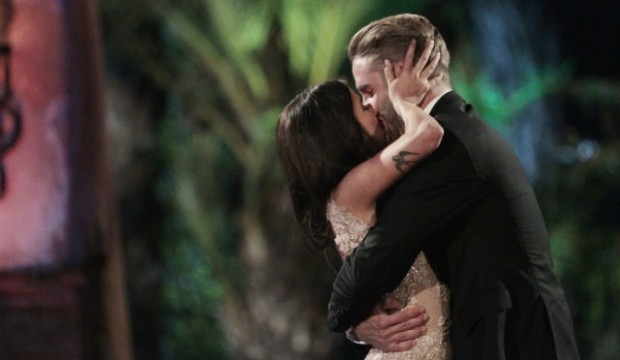 Everyone can breathe a sigh of relief. Despite copious amounts of “off-camera time” aka sex with Nick Viall, 30-year-old Bachelorette Kaitlyn Bristowe did not choose the 34-year-old walk-on contestant —instead she handed her final rose to fan favorite, 28-year-old Nashville Personal Trainer and Ryan Gosling look-alike Shawn Booth.

Tonight the two remaining suitors met Kaitlyn’s Mom, Leslie Hipkin, dad Mike Bristowe, sister Haley Jane and step mom and step dad—- and apparently in the same hotel where Kaitlyn met their families two weeks ago! I guess ABC is on a serious budget this season.

Anyhow, Kaitlyn’s family was clearly a lot harder on Nick which did not bode well for him. Kaitlyn’s sister who previously had been a Nick fan said:

“I have to be honest with you. You were possessive. You were jealous. We saw this — I don’t want to use the word arrogant, but who are you?”

Nick replies, “I am in love with your daughter. She is the most incredible woman I have ever met. If she will have me, I want her for the rest of my life.”

Shawn was next in the hot seat and mom ALSO grills him about jealousy….

“I’m concerned about jealousy,” ….. “How are you going to handle that feeling of jealousy in the outside world?”

Mom also forced Shawn to address the sex with Nick situation (A-mazing!) to which Shawn replied, “I’m in love with your daughter.”

Needless-to-say both men get the green light to propose from the Bristowe-Hipkin clan.

So then both meet with designer Neil Lane to choose a very expensive engagement ring compliments of ABC.

Then there is a lot of “hanging out” and uncomfortable one-on-one time pre-rose ceremony. Kaitlyn is quiet and riddled with anxiety and guilt.

Both men present Kaitlyn with a customary scrapbook-of-our-9-weeks-journey-on-a-reality-show-together, although Shawn presented a “memory jar” which sounds like a lot less work.

Both men are confident that they have won and evidently Kaitlyn was genuinely torn about her final decision.

Interestingly the final proposal takes place at the mansion in lieu of the usual exotic location (Really ABC must be on a serious budget or they don’t have a lot of confidence in this relationship.)

And apparently Shawn “couldn’t wait to pop the question” according to OK! Magazine. But apparently he had to wait quite a long time for Kaitlyn to finish breaking up with Nick in the limo. But when it was Shawn’s turn he got down on one knee on the freshly hosed mansion driveway and proposed, presenting Kaitlyn with a 3.5-carat $100,000 diamond ring.

Are the Kaitlyn and Shawn still engaged?

YES! They are and could not be happier.

“I didn’t think I could be this happy,” Bristowe told PEOPLE.

Despite her indiscretions with runner up Nick, Kaitlyn and Shawn are focused on the future, not the past.

“We have such an honest relationship,” Bristowe says. “Every day I think, I picked the right guy.”

Nick was not happy that Kaitlyn rejected his proposal, but at least he seemed to have learned from last season to bow out gracefully. Last year Nick was relentless in pursuing Andi Dorfman and trying to convince her that she made the wrong decision by dumping him.

Shawn told PEOPLE: “She just makes me feel different, something that I’ve never felt before. It’s what I’ve been looking for.”

“We just want to do anything normal,” Booth says. “Going out to dinner, just hanging out with our family and our friends.”

So I guess this means her SnapChat photo snafu was a legitimate mistake and not some sort of counter-intelligence launched by ABC! Stay tuned!!!