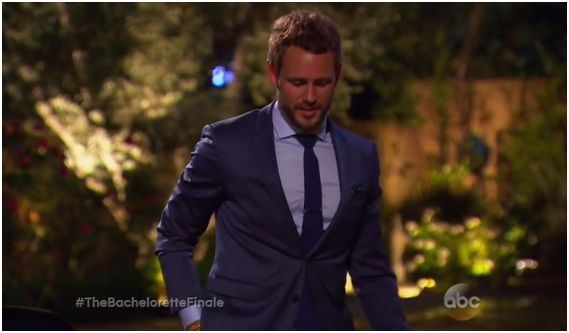 One thing Bachelorette 11 Kaitlyn Bristowe has not been good at this season is break ups. And tonight was the hardest one of all as she rejected the proposal of runner up Nick Viall.

“When I think about saying goodbye to one of the two I have left, I don’t know how to do it.”

Nick met Kaitlyn’s family tonight and interestingly they knew of Nick prior to the show since the two began talking right after Kailtyn got the boot on The Bachelor. And Kaitlyn’s sister Haley Jane had been VERY pro-Nick the entire time until she met Shawn. It was obvious to Kaitlyn’s family that her real connection was with Shawn.

Viall, 34 had his Neil Lane engagement ring confidently in hand when he approached Kaitlyn in the courtyard of the Bachelor mansion on finale night.

An insider at Us magazine claims,

“He started his speech and got emotional a few seconds in,” …… “­Kaitlyn grabbed his hand and let him keep going, and he thought that was the sign he needed to propose.”

Nick dropped to one knee and delivered a diatribe of emotions but Bristowe cut him off. “She told him they have something special and she loves him,” says the source. ”But she said her heart was with someone else.”

Nick was devestated but shockingly did not beg her to reconsider like he did with Andi Dorfman. In fact it was Bristowe who pleaded with him to stay and talk. “He was like, ‘What the ­f-k?’” says the insider.  ”He told her, ‘I need to go, and you need to go be with the other person.’ There was nothing left to say.”