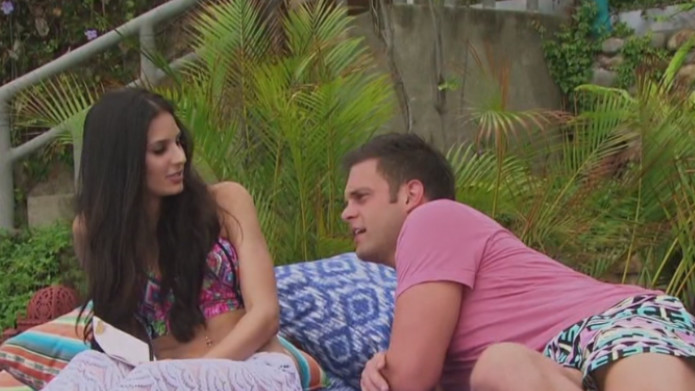 Once again the Bachelor franchise and conspiracy collide as Bachelor in Paradise contestants Samantha Steffen and Joe Bailey are caught by a camera and a boom mic conspiring to hide the true history of their relationship.

Turns out Tanner Tolbert was right when he claimed that Samantha, the 28-year-old Pageant queen from Los Angeles was “in on it”.

Earlier Tanner says Joe showed him a screengrab that said “do whatever it takes to stay in paradise until I arrive”. Both Jared and Tanner confront Joe and Joe splits hairs about how he said he never “met” her, not never “talked to her”.

The behind the scenes conspiring by the duo is juxtaposed with Samatha’s ITM where she blatantly lies about contact before the show.

So Samantha is shown telling Joe how she lied in her ITM and telling Joe what to say and to stop acting so guilty.

“We didn’t talk, I told them I didn’t know he was interested in me. It was all purely social media and text. There was no plotting with Joe. I wouldn’t do that. You can say all that. We waited. You shouldn’t come off as defensive as you seem now.”

The two continue to work on collaborating their story and Joe continues a downward spiral–but surprisingly not a shame spiral. In the meantime Sam totally dismisses friend Juelia as Juelia tries to warn her about how Joe manipulated her.

Is it really any shock that Samantha would be the master-manipulator? She is fresh off of a relationship with actor Jeremy Piven so this girl knows how to work a situation to her advantage aka maximum Hollywood exposure. Plus she has a clothing line to promote so for the love of God Joe–“do whatever you have to do”.

But stay tuned for next week’s episode because Joe is about to get played by Sam who has also been talking to new arrival Nick Peterson!