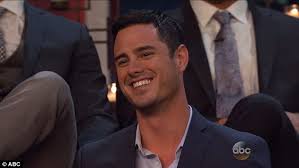 Filming for Ben Higgins season of The Bachelor 2016 officially begins on September 24th, 2015 at the Bachelor mansion in LA, but the ladies arrive in LA today. The driveway is being hosed as we speak and the landing gears are touching down and we are anxiously awaiting a cast list, but word from some show insiders is that this cast will be the most Christian cast in Bachelor history.

Not surprising considering Ben H is very Christian. Ben even has a tattoo that says.

“Commit to the Lord whatever you do, and he will establish your plans.”

“Like I mentioned a little while back, there were more christians than usual that made it to the final casting sessions. Was also told that one of the final 50 used to have a thing with a current Dallas Stars player. I know which player, but I don’t know the name of the girl, or the name of any other girl in the final 50, for that matter. Other than that, I wasn’t told anything else.”

BTW, one of those very Christian contestants is this girl Olivia Caridi who I strongly suspect is the contestant “who” dated the Dallas Stars Player since she worked with the athletes in Texas on media relations.

The insider also initially claimed that Becca Tilley would not be a contestant on Ben’s season.

“From all of the detailed information that I’ve been given, I’m still convinced that Becca will not be on Ben’s season. I trust my sources. And yes, it is more than one person.”

But then changed his mind several days ago — saying “I spoke to 2 people within the last 2 hours or so that gave me the head’s up that she is going back on. This isn’t a prank or even a guess on my part.” So that is at least TWO Christians that we now know of for certain.

Stay tuned for the official list of contestants for the 2016 Bachelor season!