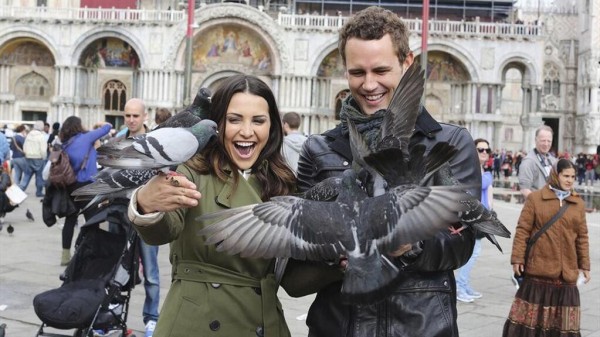 After last season’s dramatic finale of The Bachelorette where Nick Viall professed his undying love for Bachelorette Kaitlyn Bristowe you would have thought he was totally done with ex Andi Dorfman, but surprisingly not according to ET.

The two were recently at New York Fashion Week (so were Kaitlyn Bristowe and Shawn Booth BTW) and Nick was allegedly keeping very close to the ex Bachelorette at the Badgley Mischka show on Tuesday. The source claims that Nick was standing just feet away from Andi and “appeared very desperate.”

He did show up to a party with model Kelly Thomas and although Nick is dating he and Kelly are just friends.

In the meantime Nick posted a telling tweet on Monday, saying, “I miss you so much it hurts sometimes.”

I guess Nick can’t get that ‘fiancé sex’ out of his head. But he certainly put on a good show with Kaitlyn.

It looked like the two had made amends earlier this year when they were spotted out together on February 13th in a Chicago bar together, but during Kaitlyn’s season Andi told Kaitlyn to “RUN” from Viall.

Interesting in light of the fact that the guys on Kaitlyn’s season confronted Nick about his feelings for Andi and he denied them.

Yikes! We may get our first Bachelor/Bachelorette TRO soon.

1 thought on “Nick Viall still in love with Andi Dorfman”