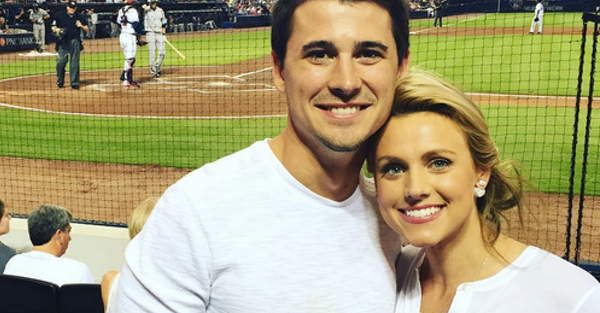 It was heart wrenching to watch Dan Cox dump Bachelor in Paradise love interest Ashley Salter a few weeks ago on the ABC show. Despite being a tad bit on the cooky side, Ashley was clearly REALLY in to Dan and really devastated by the break up, but take heart Bachelor Nation she has found love! Not only has she found love, she is engaged!

Yep, shortly after her stint on BiP she hooked up with ex boyfriend Austin Brannen.

The 26-year-old commercial real estate broker proposed over Labor Day weekend in downtown Atlanta on top of the helicopter pad of the W Hotel.

The two originally met at Auburn University where they both attended college.

Isn’t it funny how quickly Bachelor/Bachelorette contestants get engaged after starring on the show? Remember Renee Oteri was engaged and married before her break up with Juan Pablo had even aired!

Salter quickly became a fan fave on Chris Soules’ season of The Bachelor, for her eccentric, space-out and unconventional behavior.

1 thought on “Ashley Salter gets engaged!”