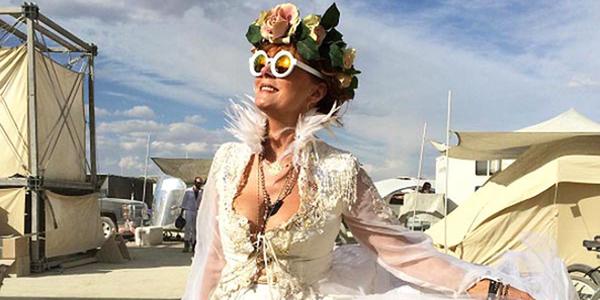 So I just returned from 9 days in the Black Rock desert in Black Rock city, Nevada where I enjoyed the 2015 Burning Man art festival. If you have ever been to Burning Man you know the biggest situation there is dealing with the porta potties. They are disgusting. They often are not stocked with toilet paper. They stink to high heaven.

The toilet seats are generally covered in some seriously disgusting unidentifiable substances–that is if there even IS a toilet seat. The floor is covered in a mishmash of dust, urine and trace amounts of fecal matter. And they are often oppressively far away from your camp.

So luckily we have an amazing friend who builds composting toilets and hauls them out to festivals. And he had been hired by a big sound camp to bring some potties to Burning Man this year. So we arranged for him to build us one and drop it off at our camp. The potty was delivered and assembled on Monday and it was amazing. It contained two toilets and two urinals and did not stink at all thanks to a bucket of sawdust that Sean left to be dumped in the toilet after using. We were stoked and ready to Potty like it was 1999.

We were also thrilled because we were situated over a block and a 1/2 from any potty banks. Everything was going great until late Wednesday night/early Thursday morning when our potty mysteriously disappeared and was switched out for an inferior potty that only contained one toilet seat.

Sean was MIA for some time (as he often is), but when we located him at his camp we learned that Susan Sarandon was now the proud user of our potty. Yes, it was true. The man handling the potties at Sarandon’s camp Cirque Gitane had walked off the job and left them lacking in the potty department so Sean was contacted to fill the need. Unfortunately the need was filled with our luxurious potty.

And look, I get it. Burning Man is all about letting go and not being so materialistic and the potty we received in place of the OG was fine and all. The only issue was the traffic jam that was now created trying to use the potty since our camp consisted of 30 campers.

But it just highlights a recurring issue at BM where the big high-end camps are ill-equipped to deal with these sort of situations and they look to people like Sean who may not have all of the big corporate potty pomp and circumstance swirling around them, but are true professionals when it comes to dealing with people’s sh!t.

The original potty was a non-sustainable flush-able toilet. And flush-able means all kinds of problems can occur in all of the moving parts with the copious amounts of dust (especially this year). And it sounds like that’s what happened.

To be totally fair, Sarandon obviously did not move the potty herself. She did not technically “steal” the potty, but in the end the potty had to be relocated for her usage.

So I hope Susan realizes how lucky she was to enjoy the use of such a simple, but elegant creation. And I hope she will make sure that next time her potty people are equipped to deal with her sh!t in the most professional and sustainable way.

Joe Bailey tries to blackmail Samantha Steffen in to liking him!

Are Nick Peterson and Samantha Steffen still together?