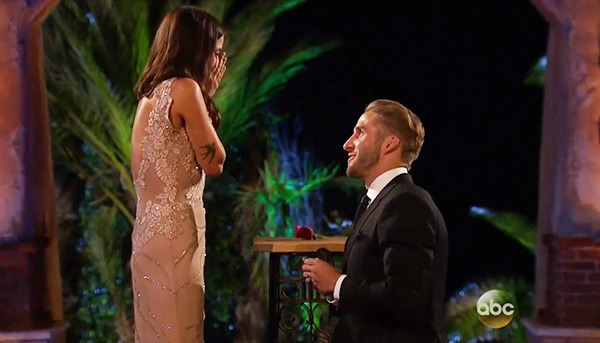 Kaitlyn Bristowe and Shawn Booth are over!! What’s that? They just got matching tattoos? I know, but it’s over. I presume the matching bird tattoos are fake just like the relationship.

OkMagazine claims that the Bachelorette stars have been over for months—which would mean they broke up right after their season aired!

But the two are staying together as part of a business deal. If you recall the same allegations were made about Andi Dorfman and Josh Murray.

An insider claims that the relationship has been “over between them for a couple of months now.” And that—“their relationship turned into a business deal,” …..“they’re sticking it out for the fame and money.”

Shawn and Kaitlyn recently went to New York Fashion Week where they sat in the front row and appeared “lovey-dovey” in front of cameras. But once the cameras were gone they became distant. A source told In Touch “They immediately stopped holding hands.”

“Kaitlyn jumped on her phone while Shawn sat there checking out the beautiful models. They acted like total strangers.”

Allegedly the couple has netted $3 million from endorsement deals and public appearances.

“Once they split, the offers will stop coming in,” …… “They know what they’re doing.”

This is shortly after the news was released that Kaitlyn was moving to Nashville to be with Shawn.

Allegedly the cute couple “really did love each other at first,” but Shawn’s jealousy led to the break up “He was constantly on her about who she was texting and talking to,” the source explained.