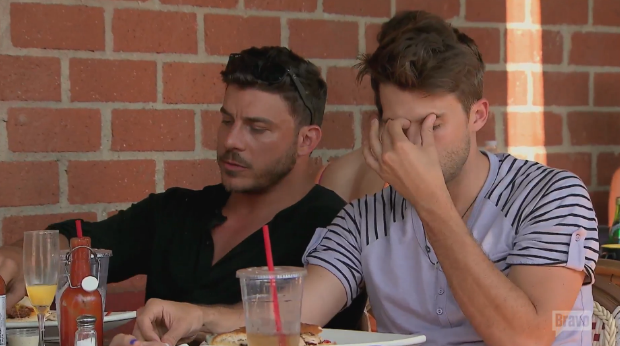 Monday night we finally got to see the precious and log-awaited proposal of 32-year-old Tom Schwartz to his longtime girlfriend 29-year-old Katie Maloney on Vanderpump Rules.

Schwartz was meticulous and careful in his planning. In fact the only person he gave details to was best friend Tom Sandoval. But why did Schwartz leave out his boyfriend 36-year-old Jax Taylor?

I’m not sure you need an explanation about why Schwartz would leave Jax out of the loop, but Tom explained in his blog,

“Key elements to the proposal were surprise, not just for Katie but for everyone present, the perfect ring, great friends and a little quirk with the decoy proposal

“The look on Katie’s face was priceless. ……Part of me wanted to include Jax on the set up but even he will admit, it was a good idea not to. Not only did I want him to get to share in the shock, surprise of the moment, but he has the loosest of lips and is like a whistling teapot on the stove when he has a juicy secret. Same goes for everyone else not in the know. I just wanted a genuine surprise for all. Katie and I had been through a lot up until this point. Highs and lows. We almost broke up several times last year. I just want to say I’m so happy we worked through everything. Going into this, it felt so good to WANT to do it.”

No doubt if Schwartz let Jax in on it it would not be a surprise and Jax would find a way to ruin it. So good move keeping Mr. Jax in the dark.

Did Lala Kent and James Kennedy break up?