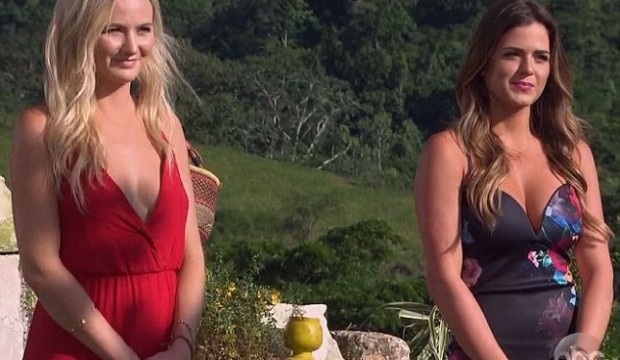 On Monday’s episode of The Bachelor Ben Higgins took his 3 remaining ladies to Jamaica for some “off-camera” time in the Fantasy Suites. And he made one major faux pas when he dropped the L-bomb on 2 of his women–Lauren Bushnell and Jojo Fletcher.

On a 1 on 1 date with Lauren releasing tiny turtles into the wild Ben confessed that he thought Lauren was too good for him — especially after her sister Mollie told him she was, but he also told her he was “in love” with her. The declaration seemed so honest and authentic that it kind of seemed like the season was over right then.

But on Ben’s date with Jojo, Jojo confesses,

“When I think about the future, there’s not a doubt in my mind, I’d want to spend it with you…I do love you. It’s weird to say that, and really hard, but I do.”

To which JoJo responds, “What? Are you even allowed to say that?”

Since Jojo clearly knows “the rules”, this declaration of love means even more to her because it means that Ben is breaking the rules. And why would he do that if Jojo was not going to be his final pick?

The two wake up together the morning after Fantasy Suites looking very much a couple — leaving producers and fans confused.

It’s all on camera. No plausible deniability here Ben. Not to mention Lauren is going to see the tent you pitched in your tailored swim trunks while kissing Jojo and probably not be too happy.

What the heck was he thinking and how did he tell his now fiancee about the situation? And why the heck did he not consult with situation specialist and armchair therapist Chris Harrison before doling out dual declarations of love on national television (in case you missed them)?

“At what point did you tell the woman you chose in the end that you had the “I love you” conversation with another woman?”

Ben replied, “Right away. We talked the night we got to stay together after the show ended for the first time, and I told her what happened because we’re a team now. Teams have to communicate, couples have to communicate. I knew how much she meant to me, and I didn’t want to do anything without her knowing it. So I was very open with her about what happened during this experience as soon as she was ready and wanted to hear it, and she has been supportive just like a good partner would. She’s been really supportive. It’s not always easy, as I don’t think it should be, but always supportive and loving and caring. I hope she never has to be put through a situation that is this brutal to watch ever again.”

Then Glamour asks about the Fantasy Suite sex. Way to dive right in Glamour!

“It’s implied on the show that sex is happening in the fantasy suite—but we never hear anyone having a conversation about safe sex. Is that talk happening?”

Um, first of all Glamour, that’s not true. Producers have talked about how they do supply condoms.

“Ben: Yeah, between the two people. The first thing though is that you’re implying the two people are having sex. That isn’t always happening. That doesn’t need to be the case. The fantasy suite is meant for two people to be together away from everything. If two adults want to have that conversation about safe sex, then sure, it’s up to them and go ahead and have that conversation. But I don’t know if it always happens. I’ve only been involved in three fantasy suites in my life. I’m not usually involved in most seasons’ fantasy suites, so I don’t know.”

Way to evade the question Ben!

Word on the street from producers is that Ben was torn on his final decision right up until the very end and the finale in 2 weeks will be “brutal”, but I’m guessing he did not tell his new fiancee that!

In the meantime, next Monday is The Bachelor: Women Tell All and Ben will have to confront the ladies he dumped for the first time. It airs Monday (8 p.m. ET) on ABC.