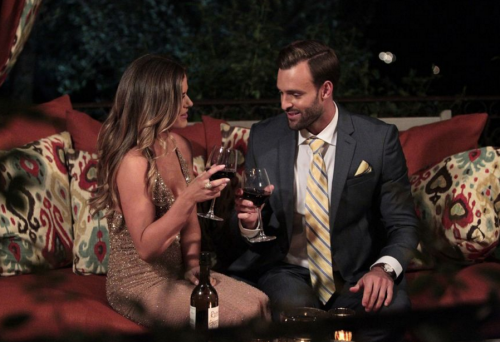 Last night on The Bachelorette Jojo Fletcher finally got to spend some time with 27-year-old competitive swimmer and model Robby Hayes from Jacksonville, Florida at the impromptu mansion pool party.

I LOVED that he told her his feelings for her were progressing “faster” than he thought they would….since the two have spent absolutely no time together since the season began.

I have to admit, I am a little biased when it comes to Robby given that I know he dumped his ex girlfriend of 4 years Hope Higginbotham the same time that he got called by producers (same as Grant Kemp) to do the show. So I am seriously suspicious of his MO.

In fact, to be honest, I think Robby is gay…like if ever there were a Bachelorette contestant to come out of the closet as totally gay after doing the show I would put my money on Robby, but I digress.

So when Robby pulled Jojo aside…my thoughts were…”oh this guy is looking to insure he gets more air time so he can launch his modeling career.”

That said here is what Jojo was thinking ….. from her PEOPLE blog,

“At the evening portion of our date, it meant a lot to me that Robby was so forth coming with how he was feeling. I knew I wanted more time with him and I could feel that things with us were progressing. Robby makes me feel so safe, and I really enjoyed the time I was spending with him.”

Jojo, shockingly does not question Robby’s motives for doing the show.

“He was someone who I felt confident in, and didn’t need to question. Jordan on the other hand, was someone I did have questions about.”

Ha!!! You may want to rethink that Jojo. Little does Jojo know she is surrounded by douchebags with angry ex girlfriends.

At least we do know that Jojo confronts Robby later in the season about his ex so at least she learns the news before the finale.

3 thoughts on “Jojo Fletcher on her feelings for Robby Hayes”