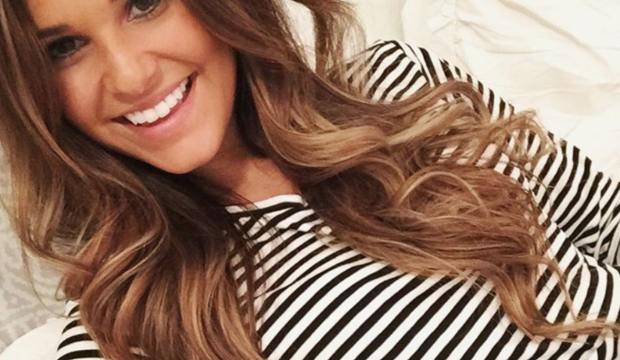 Well it looks like ABC and Bachelorette Jojo Fletcher will address the fact that 27-years-old Robby Hayes from Jacksonville, Florida left a girlfriend to do the show.

So who is Robby’s ex girlfriend Hope Higginbotham?

Hope is a 24-year-old realtor for Berkshire Hathaway HomeServices in Ponte Vedra Beach, Florida and she and Robby were in a very serious relationship until he dumped her in January of 2016 (Hmmm same time that Grant Kemp dumped his girlfriend–coincidentally the same time that producers call).

She recently graduated from University of North Florida in 2016.

According to one insider Hope was really in love with Robby and really close to his family.

“I just saw them together earlier this year and have friends who are really good friends with them. My heart breaks for Hope because I know how much she loved him and his family. She spent more time with his family than she did her own I believe. She would drive to Sarasota where he worked and visit almost every chance she got if he didn’t come home. Like every couple with their ups and downs through time they were the couple you jokingly see photos of or out and about and ask when are y’all getting married?! It seemed Robby was still growing out of his “fraternity” college life and Hope still in school but they were the cutest couple.” Seems Robby and his siblings come from a very wealthy family in Sarasota. “I heard Robby recently became more high maintenance and prissy after he started modeling but who knows…… It just shocks me to know he is a possible candidate on this show. His family should be embarrassed for allowing him to do this. They are the little proper country club style family and even though he is of age and still lives at home, they could have encouraged him not to do so or at least wait for a little bit after a breakup of a long relationship and have a little bit of class. But after hearing recent stories of Robby he probably only did the show for attention in hopes of some more modeling jobs!”

And then the thing I was wondering…is it possible Robby Hayes is gay?

“I questioned if he was gay past few months after the only things that he would post were of him and guys and a few pictures here and there of him and Hope. Maybe that’s why they broke up? Cause she thought he was gay?!”

I swear ABC and Jojo should just line the guys up in one room: Jordan Rodgers, Robby Hayes and Grant Kemp and grill them about their ex girlfriend situations!

So allegedly Hope cheated on Robby with his brother’s best friend (“hope”-fully this will be addressed—”hope”-fully Hope will show up to Hometowns in St. Augustine). Interestingly his family was very close to Hope BUT it was Robby’s sister who sent his application to The Bachelor while they were dating!