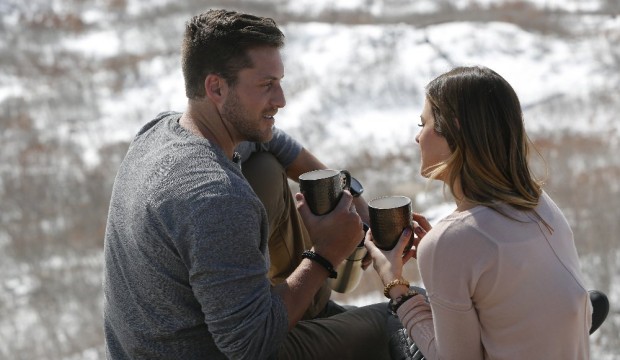 Tonight we got to meet the families of Jojos four remaining hostages—I mean suitors which meant we got to eavesdrop on years of family dysfunction. And first up is Denver, Colorado for a very “Rocky” Mountain High Hometown with Chase McNary’s divorced parents Doug McNary and Sandy Graham.

Not only are the two divorced (19 years now), but the divorce was so bad that the hard feelings are still too raw to touch and the two can not be in the same room. Thus we require 2 mini-Hometowns.

First Chase decides that he needs to brief Bachelorette Jojo on the delicate situation. She asks Chase if the divorce was “bad”.

So first up is dad, Doug who has to remind Chase that he is competing with 4 other guys (because dad apparently sees everything as a competition and not a ‘journey’) and reminds Chase there is a chance he may not “win”.

Chase says he is not going to deal with the “what ifs” and is all in.

Then when sitting across from dad with potential life partner Jojo, Chase seizes the moment to do something big.

He apparently has waited his entire life for this moment—He has at least been waiting since he was 8 years old to eloquently ask his father a very important question…on national television…and I quote, “why did not your first marriage work out?”….he clarifies…”with mom”.

Doug claims that his efforts to succeed in business hurt his marriage.

See, Chase’s dad is clearly an Achiever (the Ennegram 3). He likes to challenge himself.

This may explain why his mom and dad divorced and Chase’s dad shockingly did find “something better”, in his mind. He is happily remarried to Chase’ stepmother which he awkwardly reminds Chase of by telling him, “the relationship I have now has been the happiest time of my life”…really dad?

Did you have to get ONE more shot in at mom…and on national television?

in the meantime, I am struck by the building code violation in the background since I am simultaneously writing about the Bachelorette and studying for my Architecture Board exams.

Of course I love a stair with no rail. And really that tells you everything about Chase’s dad. What he lacks in charisma he more than makes up for with moxy. He is not afraid to take risks. He makes his own rules. Sure it may look reckless to some. Someone could fall and break a leg, but Doug is not afraid to walk down a rail-less stair.

So next we meet Chase’ mom who seems cool as sh!t. And we learn that Chase likes his mom better as he tells Jojo she will be meeting the “closest family members that mean the most to me.”

That’s what you get dad for suing mom.

Chase and his sister confide in one another about how the rocky divorce affected their ability to emote in relationships and how love to them is “just a word” yet “so much more than a word”. And hint that dad is a serious dick.

Chase’s mom starts crying as she talks to him about wanting him to be happy and being worried he could get hurt. What is wrong with parents? Why are they so hung up on their kids getting “hurt” in this process?!

Next week, Men Tell All!