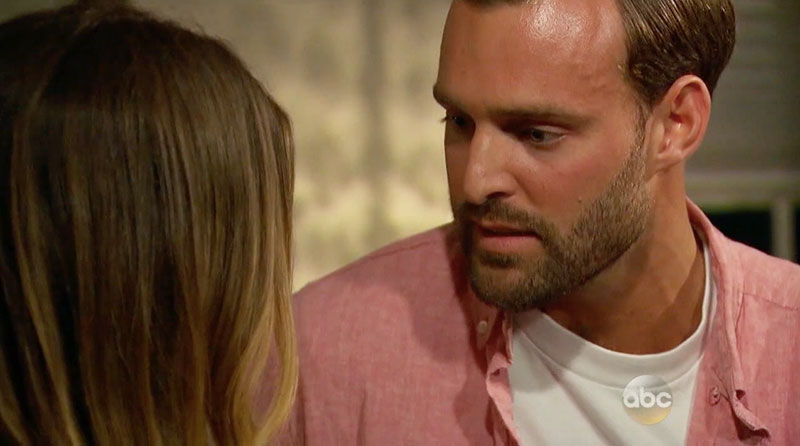 Never before have Bachelorette Hometowns been so filled with drama!

27-year-old Bachelorette contestant and former professional/almost Olympic swimmer Robby Hayes heads home to St. Augustine, Florida and arrives to news that his ex girlfriend’s roommate “Alex” has been spreading rumors that Robby dumped ex girlfriend 24-year-old Hope Higginbotham to be on The Bachelorette.

“I have this fear….say I end up with Robby and we get engaged and after a year he realizes he didn’t take enough time for himself”….

“that’s something that I wish I had done after my 4th relationship”.. wait…whaaat??! Wasn’t that your relationship with Chad Rookstool!? and aren’t you saying that being The Bachelorette was essentially a mistake aka you should have taken more time?

The other funny thing about their convo was Jojo expressing that she LITERALLY decided THAT day that she was “falling in love with Robby”…that prior to that day she was not sure if she could fall in love with him…thank God! Just in the nick of time!—good work producers!

Anyhow, mom then sits down with Robby and says,  “I have a little concern” …”there are people who are saying things about Robby and his ex.”

“There is an issue…your exes roommate has made it look like you broke up to go on the show”..”Alex”, Robby replies, “why would she say that.”

“We know its not true” his mom says.

Robby tells his mom that he is in love with Jojo and his relationship with Hope, “is such a part of my past and its never going to come up again”

“I just dont want to get heartbroken again”.

Then Robby breaks in on the confidential 2 on 1 Jojo is having with Robby’s sisters and tells Jojo, “people are saying I’m not here for the right reasons…my ex girlfriend’s roommate”…..”saying I broke up with her and bolted”

The news is very disconcerting to Jojo who already has major concerns about Hope. She says,

“what would be the benefit of your exes roommate saying stuff if it isn’t true?”

“did you break up with her when you found out you were going to be on the show?”…….“just tell me know.” Robby says “NO”.

“My relationship with Hope…was over 9 months before it actually ended….it’s something that I didn’t have the capacity to end when I should have because I thought changes were going to be made and I tried to give her the benefit of the doubt….I ended it in December after a blowup fight and she slapped me”…”and I havent spoken to her since then and I will never speak to her again”

Jojo then replies with a hypothetical,

“what if it’s you and me in the end and we are still dealing with your ex because I know what thats like”…she SURE does!

Jojo returned home from Bachelor Ben’s season and immediately got back together with her ex boyfriend Chad—4 months ago.

As a side note Reality Steve has his panties in a wad because ABC did not mention his name as the source of the rumors, but Reality Steve was not the first to publish info on Hope or even on Robby being a contestant on the show. He loves to take retroactive credit!