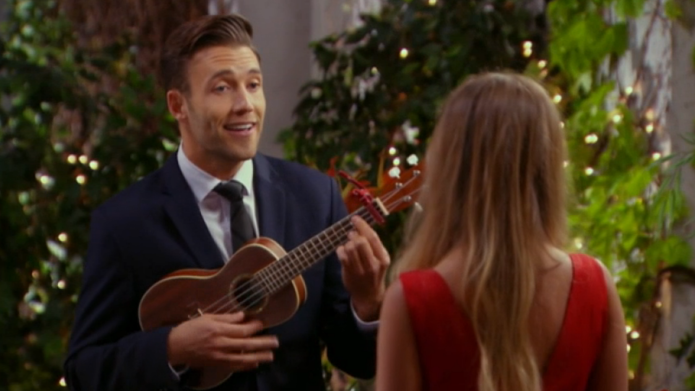 But first we met our handsome host Noah Cappe who is very enthusiastic about his new job helping Jasmine find a life-partner and who is working the situation hand gestures very intensely. I’m just not sure anyone has the finesse of Chris Harrison—but I digress.

Then we meet Bachelorette Jasmine who is talking with her mom Linda Lorimer and her younger sister and we learn that Jasmine is suffering from some serious childhood trauma. In fact her emotional mother says, that she hopes Jasmine will meet “somebody who will care for her and all her faults.”

Jasmine explains that her father passed away when she was 12 years old. She said she knew something was wrong because he was supposed to come watch her ice skate and he never showed up. Jasmine tearfully confesses that it was the first taste of losing a man that she loved and has made it hard for her to be in a relationship.

She claims that she doesn’t want to “sabotage every good relationship because I’m afraid of it ending. It’s like a cage. I want to free myself from that.”

In other words, watch out viewers. We have a situation on our hands. This Canadian siren could charm the pants off of these young men only to spit them out in the end, aka there are no guarantees this journey will have a happy ending. Watch at your own risk!

So Jasmine is looking for some advice and luckily one Bachelorette from the US franchise is Canadian — Jillian Harris, so she meets with Jillian for some advice–which is kind of funny since Jillian’s relationship Ed Swiderski was a disaster, but who cares. I love seeing Jillian. She just has an unprecedented charisma and really has nothing much to say in the way of ‘advice’, but she does pump Jasmine up for the journey.

Then we finally meet the men!!!

So here was my take on the 10 biggest situations from the Bachelorette Canada premiere.

1: The men are very happy with the Bachelorette–some may be a little too happy (Wales). Understandably the men are thrilled when they meet Jasmine.

2: Kevin W. is a dead ringer for James Marsden. He’s a 32 year old firefighter and clearly very nervous and shy. He compares being on The Bachelorette to hockey try-outs–which actually sounds pretty accurate.

3: Mikhel is way too excited about working on helicopters. I’m just imagining a lot of conversations with way too much detail about how helicopters work. His days/minutes are clearly numbered.

4: Kyle is way out of scale. He is so handsome, but I can’t take him seriously because every time he stands next to anyone it’s clear that he exists at a totally different scale than the rest of us humans.

5: JP is the pant-less Butler from Whistler and at first I was certain he was just an actor hired to shock everyone with this schtick (since NO ONE had much of a schtick and this guy definitely had a ‘schtick’), and clearly he was gay, but he sort of won me over when he did put pants on and refused to cede Jasmine to drunk Tony when Tony demanded some one on one time with Jasmine.

I think he may actually be straight and looking for a girlfriend……but we shall see. 6: Speaking of gay. Musician David Pinard is a d!ck. But I think he is overcompensating for the fact that he is gay and trying to appear straight long enough to launch his music career.

That was such a douchey move to perform and then shout “top that”. Those two words sealed his fate I’m afraid.

Prior to that he still had a chance to fool Jasmine into falling for him and thinking he was straight–at least until Fantasy Suites, but it’s clear Jasmine actually likes nice guys and this dickish maneuver was a big turn-off.

7: Thomas Perass is an “International model”. Is that really a job? I mean he is certainly good-looking but is anyone so good-looking that they are flown all over the world to model? Aren’t there good-looking people everywhere?

What I am getting at is I think Thomas is a male escort. But I do love that Bachelorette Canada has a real live Derek Zoolander. He must give really good ‘Blue Steel’ to earn that air fare.

Speaking of model moves, Jasmine gives him the nickname “Sexual Tongue” because he does a very sexy move with his tongue. Obviously Thomas is a good lover and a romantic. Jasmine is very attracted to him but is sexual chemistry enough for these two?….we shall see. 8: Kevin P. gets huge points for being seriously ill and sticking around. Of course he may lose a lot of points too for being contagious and spreading the flu.

When he has a chance he pulls her aside to ask her about her wrist tattoo. She explains that the tattoo was free when she purchased two tacos in Bali. Clearly Jasmine has a wild side.

9: Cowboy Tony is a drunk. I thought surely Tony Harris would stick around for a while–so certain I made him a bio page. But alas Tony gets embarrassingly drunk and gets the boot.

Mike confides in Jasmine that he has had a problem getting close to girls because he lost his mother when he was young and his sister left them. Jasmine is impressed that Mike is so willing to be so vulnerable right away and gives him the rose.

My money is on Mike.

In the end she sends home 5 guys: Ross, Dana, Taylor, Eddie and Tony the cowboy.

Despite the childhood trauma Jasmine does concede “to imagine that I could be engaged at the end of this journey is a crazy thought”.

2 thoughts on “10 Biggest Situations from the Bachelorette Canada premiere”