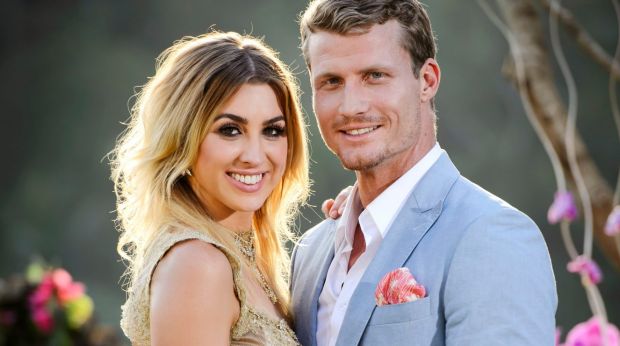 This season is no different. Fans felt certain that the 32-year-old Mining Rope Technician would choose 28-year-old Real Estate agent Nikki Gogan, but in the end he chose 24-year-old single mom Alex Nation.

And interestingly one of the furious fans is none other than Richie Strahan’s close friend and ex girlfriend Sam Frost who grilled Richie about his decision to ‘bring Nikki along all the way to the finale knowing she was so in love’ during Friday’s Rove & Sam Show on 2DayFM, asking:

‘Did you ever think, “You know what maybe I should let her go a little bit earlier to save her from that heartbreak?”‘ Oh come on Sam! As Australia’s first Bachelorette you of all people know the rules!

Richie shot back saying he could not simply go to producers and say, “Yeh guys, I know who it is, wrap this up,” it just doesn’t work like that,’ he told Sam and Rove McManus.

Richie also claimed he was not aware of the seriousness of Nikki’s feelings for him.

‘When you watch it back and you see those [vox pops] of Nikki saying those things, they’re the kind of conversations I’m not privy to, so there’s a lot of things I do miss there.’

‘I was in this position where I did build a really beautiful relationship with Nikki but I was definitely falling for Alex,’ he continued.

Richie no doubt has seen the ire of fans on social media after he told Nikki,

‘Nikki, I really hope you understand…but my heart is with Alex.’

Take heart fans. I have a feeling Nikki is the real winner here and will get a second chance at love as the next Bachelorette.